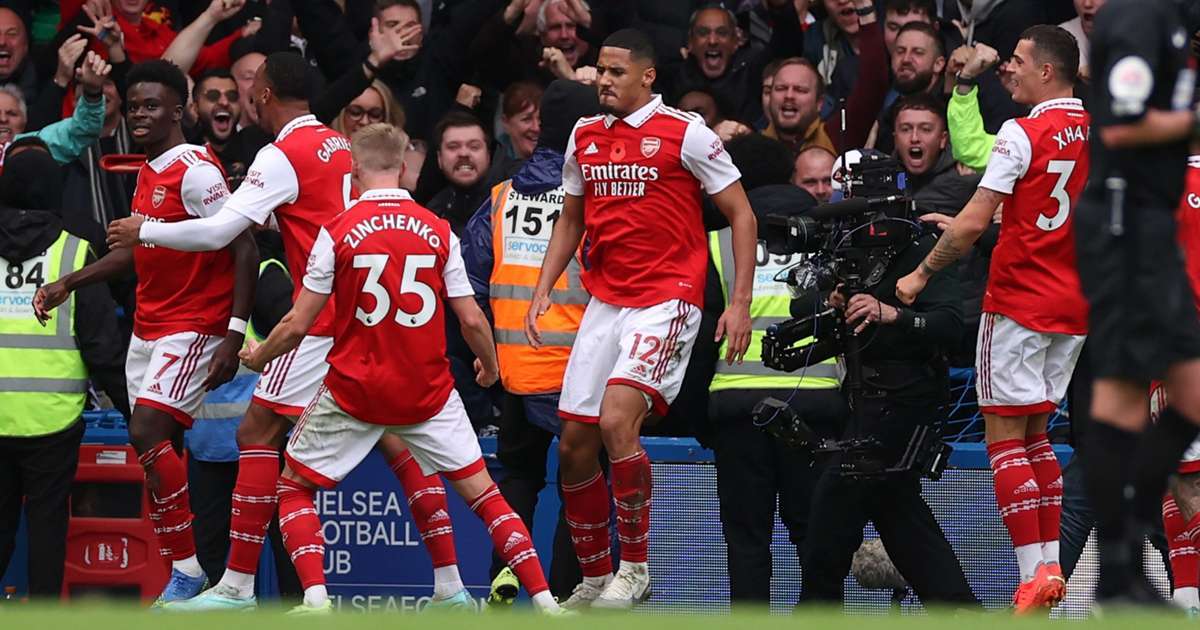 Gabriel capitalised on some terrible Blues defending from a Bukayo Saka corner in the second half to move Mikel Arteta’s side two points clear of Manchester City.

The Gunners were good value for their third consecutive away win over their London rivals in the top flight, as Pierre-Emerick Aubameyang endured a miserable first game against his former club.

Chelsea have now suffered back-to-back top-flight defeats and this was their first loss at Stamford Bridge since going down 4-2 to Arsenal in April.

Arsenal dominated possession in a bright start and Ben White spurned a chance to put them in front when he dragged a shot wide from the edge of the penalty area.

Aubameyang was booed by the Gunners fans and the striker’s only notable contribution in the first half was when he was booked for a late challenge on White.

Arsenal failed to have an attempt on target in the first half and they were wasteful again 10 minutes after the break, when Thomas Partey nodded wide with Martinelli behind him poised to head home Martin Odegaard’s delivery.

There was more frustration from Jesus when he was denied from a tight angle, but Mikel Arteta’s side were deservedly in front after 63 minutes as Chelsea were caught napping.

Gabriel could not believe his luck when Saka’s corner evaded everyone and gave him a tap-in to break the deadlock.

GK: Edouard Mendy – 5/10 – Uncertain when pressured with the ball at his feet but showed some penetration when given time in possession.

RB: Cesar Azpilicueta – 3/10 – Desperately unconvincingly when groggily back-pedalling up against Martinelli. Criminally let Gabriel run off him for the opener.

CB: Trevoh Chalobah – 5/10 – Uneasy getting lured out wide but secure enough when within the confines of his penalty area.

CB: Thiago Silva – 7/10 – Positionally supreme, making up for the lack of physicality his seniority ensures.

LB: Marc Cucurella – 4/10 – A little too scrappy as he rapidly got touch-tight to the red shirts, giving away a glut of fouls.

CM: Jorginho – 6/10 – More concerned with pinching possession than passing in a disciplined display.

AM: Raheem Sterling – 5/10 – Tried to dart around the outside of his former Manchester City teammate Zinchenko as the fullback tucked infield.

AM: Mason Mount – 6/10 – At his niggling best to repeatedly disrupt the early stage of Arsenal’s buildup.

ST: Kai Havertz – 3/10 – Dawdled in possession in a dozy approach to the early kick-off.

ST: Pierre-Emerick Aubameyang – 4/10 – Skirted around the fringes of his much-hyped grudge match which fell flat.

RB: Ben White – 7/10 – Afforded ample space to carry the ball into and was very solid when forced into aerial interventions.

CB: Gabriel – 7/10 – Secure and safe in his own box before delivering a telling touch at the other end.

CM: Martin Odegaard – 5/10 – Grew into the game after an anonymous first half but was timid in front of goal.

CM: Thomas Partey – 7/10 – Gobbled up any loose ball in midfield, providing the base for his colleagues to spring forward from.

RW: Bukayo Saka – 5/10 – Engaged in a fractious head-to-head with Cucurella throughout the contest.

ST: Gabriel Jesus – 7/10 – Popped up all over the pitch, surging over every blade of grass.

LW: Gabriel Martinelli – 6/10 – Sporadically threatening as Chelsea afforded him space to sprint into down the left.

Manager: Mikel Arteta – 6/10 – Spent much of the contest hopping around the fringes of his technical area but will be jumping with joy given the grit in the absence of glitz from his side.

Player of the Match – William Saliba