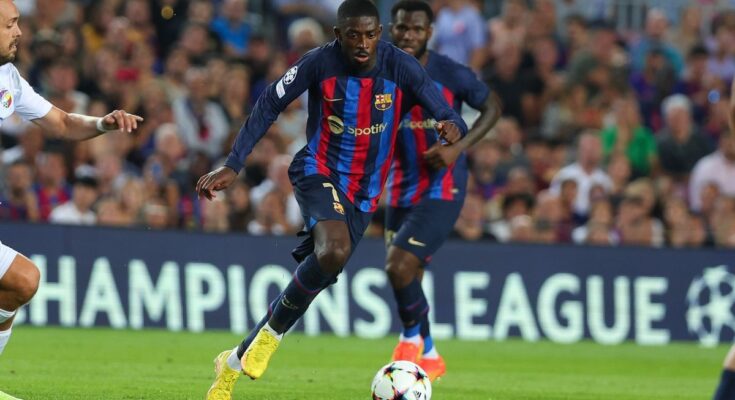 Ousmane Dembele has shown the same ability to beat defenders as Neymar did in his Barcelona prime, according to head coach Xavi.

The French winger added three assists as Barcelona beat Viktoria Plzen 5-1 in their Champions League group opener on Wednesday, an ideal result ahead of tougher tests against Bayern Munich and Inter Milan.

Robert Lewandowski grabbed a hat-trick, and Dembele set up the striker’s second and also goals for Franck Kessie and Ferran Torres.

Remarkably, Barcelona and Dembele were in a contentious situation just eight months ago, with the club at one point telling the winger to leave amid a contract dispute.

He has since signed a new deal at the Camp Nou that gives the club and players security until 2024, and his form on the wing has been largely outstanding.

“I don’t want to throw flowers but the ability he has in one-on-one situations is at the level of the best Neymar,” said Xavi, who played alongside Neymar for Barcelona.

The only aspect where Xavi would ask more from Dembele is to push him to add to his goals.

“He needs to be more daring to shoot at the goal and score,” said Xavi. “He’s a good boy and he needs to use those qualities. He’s here to make a difference and he’s doing it.”

Neymar left Barcelona for Paris Saint-Germain in 2017 and remains with the French giants.

His prowess in front of goal is something Dembele can only aspire to because despite Xavi’s claims, there is a huge gap between Neymar’s and Dembele’s performance.

However, their form in terms of finishing is strikingly different, with Neymar scoring 19 goals and Dembele managing just three. And that’s despite Dembele attempting 68 shots to Neymar’s 54.

Of this high number of shots, Dembele has only hit the target 15 times, while Neymar has done so on 31 occasions.

Neymar exceeds his expected goals (xG) of 12.44, while Dembele’s xG of 4.99 suggests that his shots often come from areas where he is highly unlikely to score. The xG metric focuses on the quality of the chance and the likelihood that it will result in a goal.

Neymar’s shot-to-goal conversion rate is an excellent 35.19 percent, while Dembele lags behind at 4.41 percent.