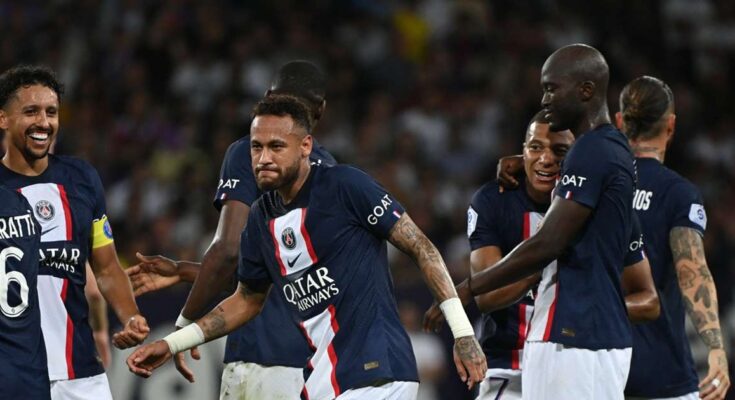 Paris Saint-Germain recovered from their blip against Monaco to ease to a 3-0 win at Toulouse.

The Ligue 1 champions were held to a 1-1 draw at the Parc des Princes on Sunday, but another surprise result was not in the south of France.

PSG dominated the open contest and would have won by a wider margin but for a superb performance from Toulouse goalkeeper Maxime Dupe.

But goals from Neymar, Kylian Mbappe and Juan Bernato made it four wins from five for PSG, who have Marseille and Lens for company on 13 points at the top of the table.

A frantic start to the match saw both goalkeepers consistently pressed into action. Thijs Dallinga twice drew saves from Gianluigi Donnarumma, while Dupe did well to deny Lionel Messi and Kylian Mbappe.

Messi then fired Nuno Mendes’ rebound wide before seeing another weak effort turned away by the impressive Dupe, who produced finer reflexes to keep out Mbappe’s deft volley near the post.

However, Dupe could do nothing to stop Neymar rolling into the bottom right corner after Marco Verratti and Messi combined neatly, the goal initially ruled out for offside before VAR intervened and the assistant referee corrected.

PSG would have doubled their lead before half-time when Messi created another chance, but Dupe proved a match for a close-range effort.

Dupe produced further heroics to claw out a classic Messi free-kick, but was eventually beaten again when Messi burst down the left, lowered his shoulder to send Mikkel Desler to the turf before kicking Mbappe in for a simple finish.

Vitinha saw the diving Dupe struggle to contain himself as his goal came under constant pressure, with Mbappe again frustrated when his brutal effort clipped the crossbar before Toulouse’s shot at the end of a quick break thwarted him once more.

Mbappe played a big part as PSG finally found a third, his long drive rattling off the left post and deflecting into the path of Bernat to rattle home.