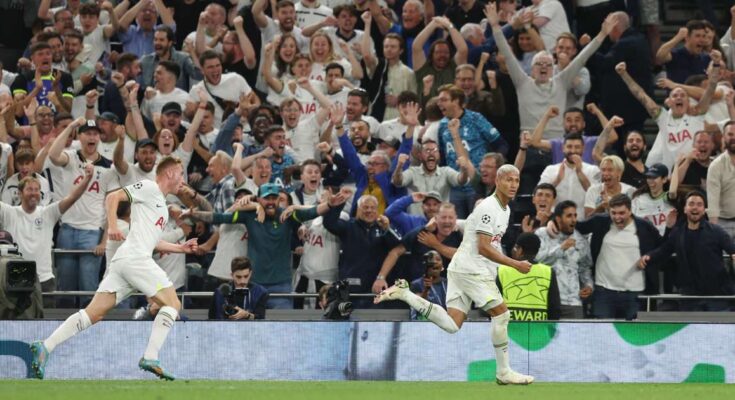 Richarlison scored his first two Tottenham goals as they marked their return to the UEFA Champions League for the first time since the 2019-20 season with a 2-0 win over 10-man Marseille on Wednesday.

Spurs got off to a slow start in their first competitive encounter against Ligue 1, but their case was greatly helped just after half-time when Chancel Mbemba was shown a straight red card for a professional foul.

Antonio Conte’s men took full advantage of that numerical advantage in the final 15 minutes when Richarlison twice slotted past Pau Lopez to the delight of the Tottenham Hotspur Stadium crowd.

The result leaves Spurs level on three points with Sporting CP at the summit of Group D after the Portuguese side beat Eintracht Frankfurt 3-0 earlier in the day.

Spurs did most of the pressing in the first half, yet their only chance fell to Harry Kane five minutes before the break, the England captain stretching after being played in by Son Heung-min.

Marseille’s hopes of returning to France with a positive result were dealt a blow two minutes into the second half when Mbemba received his marching orders for bringing down a clean Son just outside the penalty area.

Substitute Dejan Kulusevski brought a much-needed spark to Spurs’ attack after his introduction on the hour and the new-look visitors took the lead in the 76th minute when Richarlison headed home Ivan Perisic’s cross.

The former Everton man put the result beyond doubt five minutes later with another header – this time from Pierre-Emile Hojbjerg’s cross – leaving Lopez with no chance.