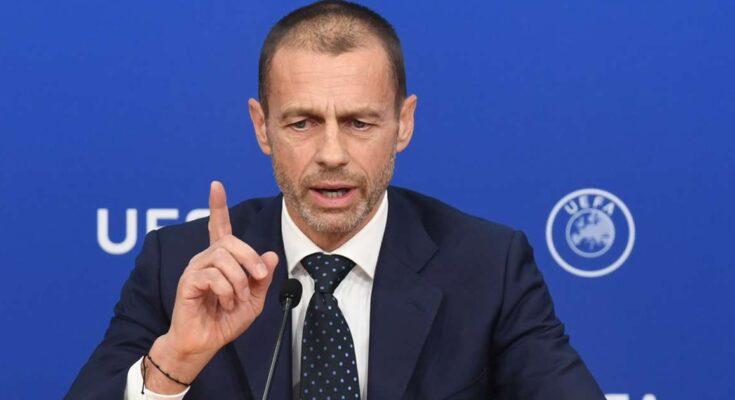 Although most of the Super League’s founding members withdrew in the face of public and political pressure after the much-criticized launch last April, Real Madrid, Barcelona and Juventus remain committed to the project.

Florentino Perez, who was set to be appointed Super League chairman, continues to call for Europe’s elite clubs to break away from UEFA, insisting the breakaway competition was “still alive” in June.

Recently, Madrid midfielder Toni Kroos supported the Blancos president’s stance by claiming: “[The Superliga] should have been up and running for a long time”.

But Cerferin, speaking at FPF Football Talks Portugal 2022, stressed his confidence in the current structure of the continental game.

“Football will certainly always remain open in our competition. The essence of European football, which is by far the strongest football in the world, is that it is open,” he said.

“Those people who think that only elite people play football don’t understand that even they would be much worse off if they didn’t all have to compete.

“Last season we saw Sheriff [Tiraspol] from Moldova win in Madrid against Real Madrid. If my Slovenian team with a budget of two million won against Tottenham, that’s the essence of European football. It’s part of our culture. It’s part of our history and never it won’t change.

“This is the most important part of football and that is why we are as successful as we are. I absolutely insist and will insist that the dream remains alive for everyone.”

One of the main motivations for clubs to break away from UEFA is to host more money-spinning competitions against other elite teams, in addition to being able to regulate their own competition.

Despite the demise of Super League, participants are set to get their wish when the Champions League introduces four more group stage matches for each team from the 2024-25 season.

The change was met with heavy criticism from some quarters, with the busy nature of the football calendar already a major point of contention.

While Ceferin acknowledged the challenges the roster had caused, he claimed a “balance” had been found between player welfare and financial sustainability and pledged that no further reforms were planned.

“The calendar is very tight. I have to say it seems to me it’s probably getting close to the limit. It’s about the clubs having to stay sustainable,” he added.

“If clubs want to be sustainable, they have to have a certain number or number of games. Now the main complaints are the big clubs who really play more than others, but from another point of view they have 25 top players.

“So the truth here is not black and white. I think we should seriously think about the number of games, some think two cups is too much. That is not in UEFA’s jurisdiction to decide.”

“But basically from one point of view the clubs are saying they want the matches to have revenue so they can say sustainable. From the other point of view some are complaining about too many matches.

“So we have to find a balance here. I think we found it and we changed the 2024 competition post. After that I don’t see any possibility of us changing anything anytime soon.”

Meanwhile, Čeferin also emphasized his confidence that the World Cup will return to Europe in 2030 and backed a joint bid by Spain and Portugal.

“I see it as a winning bid. We will do everything we can to help that bid. It’s time for Europe to host the World Cup. Both countries are passionate about football,” he said.

“You feel and feel football in Spain and Portugal. The infrastructure is great.

“So we have some plans to help. I think and I’m sure it will be the 2030 World Cup in Spain and Portugal.”