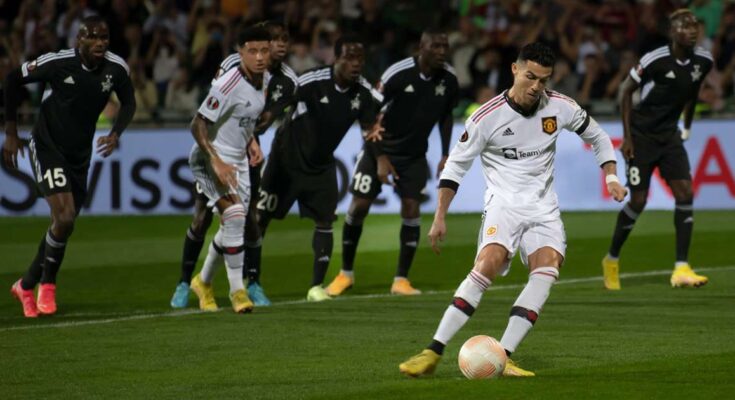 Cristiano Ronaldo closed in on his 700th club goal by converting a penalty in Manchester United’s 2-0 win at Sheriff.

Cristiano Ronaldo scored his first goal of the season as Manchester United got their UEFA Europa League campaign up and running with a 2-0 win at Sheriff on Thursday.

Ronaldo, picked to lead as Erik ten Hag kept rotation to a minimum against the side that stunned Real Madrid in last season’s Champions League, slotted home a first-half penalty to make it 2-0 for United after Jadon Sancho opened the scoring. scoring.

Ronaldo moved to 699 club goals with his free-kick and missed the chance to reach the 700 milestone after the break, but United produced a controlled performance to see out victory.

Although Sheriff started well, Manchester United took the lead with their first real attack on 17 minutes when Sancho turned Christian Eriksen’s pass to tuck a neat finish into the bottom right corner.

Iyayi Atiemwen curled in from the bottom left corner with David de Gea unmarked before Stjepan Radeljic denied Sancho a second with a heroic goal-line clearance.

Manchester United were soon presented with an opportunity to double their lead through Patrick Kpozo, who was fouled by Diogo Dalot.

Ronaldo, who has had to settle for a substitute role in Manchester United’s last four Premier League games, slotted the penalty straight into the middle.

Radeljic was on hand to clear again when Ronaldo hit the back post after the break before Rasheed Akanbi almost caught De Gea with a sumptuous long-range lob.

Ronaldo volleyed into the top-right corner from 18 yards as the chance for his 700th club goal went begging, even as United had little trouble sealing a fifth win in their last six games.

GK: David de Gea – 6/10 – Quiet night at the office for the Spaniard, who merely had to stand and look pretty for the most part.

RB: Diogo Dalot – 7/10 – Won the penalty that put United two up with the kind of positive run from deep that really hurts teams. A positive performance that showed again just how much Dalot has come on under Ten Hag.

CB: Raphael Varane – 6/10 – A composed performance from the Frenchman. Didn’t have much to do, but kept things neat and tidy.

CB: Lisandro Martinez – 6/10 – Having a central defender who is not only comfortable bringing the ball forward but is agile and can actively pick out line-splitting passes continues to prove a huge boost for United. Martinez’s work on the ball was the highlight tonight.

LB: Tyrell Malacia – 6/10 – Grew into the game as United enjoyed more of the ball and looked solid when able to get forward. Not as involved as he perhaps would’ve liked to have been, mind.

CM: Scott McTominay – 6/10 – Another impressive display from the Scotland international who continues to go full ‘McTerminator’ in an attempt to keep his place in the team. Only played the first half, though, so nothing major to report.

CM: Christian Eriksen – 8/10 – He’s good is that Eriksen fella, isn’t he? Like, really good. Always on for the pass, and always capable of picking out the perfect pass. What a lovely footballer.

CM: Bruno Fernandes – 7/10 – Showed off his brilliant passing range and a few sharp touches in tight areas. Not quite as gung-ho as usual; if there was ever a game to try your luck from long range with the space afforded, though, it was this one.

RW: Antony – 6/10 – Flashes of flair and excellence from the Brazilian, in a much improved display compared to last week’s affair vs Real Sociedad. Not at his scintillating, ankle-breaking best just yet, but the signs are there.

ST: Cristiano Ronaldo – 6/10 – Yes he scored from the spot and no he wasn’t horrific, but Ronaldo’s touch wasn’t sharp, his runs were slow and he looked sluggish. Concerning. Props to him for doing that celebration, though – shameless.

LW: Jadon Sancho – 8/10 – Took his goal brilliantly with his first proper touches of the game. Individual brilliance denied him of a brace. When he gets the ball inside, Sancho is endlessly composed. Brilliant footwork again.

SUB: Casemiro (45′ for McTominay) – 6/10 – Continued more of the solid work McTominay did at the base of midfield and broke up any rare counter attacks well.

Manager: Erik ten Hag – 8/10 – Away victory, good performance and a clean sheet. The Dutchman clearly prepared the team well. Would’ve been nice to see United open the floodgates, but we can’t be too harsh. Job done.

Player of the Match: Christian Eriksen