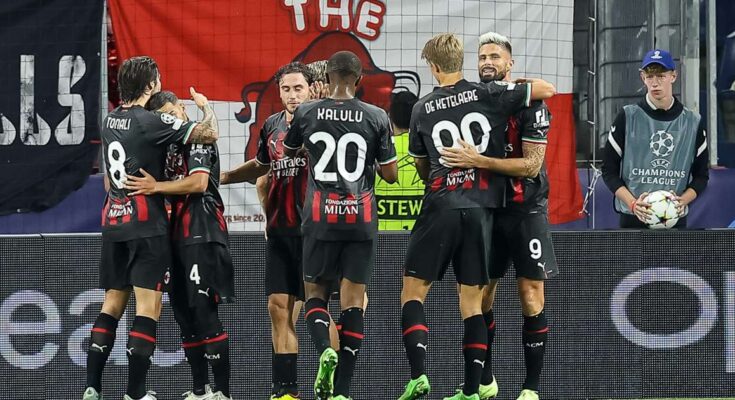 Milan came from behind to clinch a hard-fought 1-1 draw at Salzburg in their UEFA Champions League opener, as Alexis Saelemaekers cancelled out a superb solo goal from Noah Okafor.

Okafor’s superb strike gave Salzburg the lead midway through an even first half, only for Saelemaekers to equalize shortly before the break on Tuesday.

Stefano Pioli’s men were unable to follow up the Belgium international’s effort but almost grabbed a stoppage-time winner through Rafael Lea, who was denied by the frame of the goal.

After failing to escape from the UEFA Champions League group stage last season, the Serie A champions can still be relieved to escape unbeaten before meeting Dinamo Zagreb and Chelsea.

Both sides created openings in an entertaining opener, Nicolas Capaldo headed over the bar before Olivier Giroud headed straight at Philippe Kohn from a tight angle.

But Salzburg hit the front with a superb goal in the 28th minute when Okafor collected Fernando’s pass, then slipped the ball between the legs of Pierre Kalula and finished neatly past Mike Maignan.

However, Milan equalized five minutes before the break when Leao set up Saelemaekers to beat Kohn with his left foot from 10 yards.

Salzburg missed a golden opportunity to retake their lead eight minutes after half-time when Fernando somehow lifted his effort over the bar from six yards after meeting Maurits Kjaergaard’s cross.

Nicolas Seiwald then tested Maignan from range before the hosts appeared to run out of steam, allowing Sando Tonali to dictate play for the Rossoneri.

Leao came agonizingly close to grabbing the winner in the 93rd minute but saw his long-range effort bounce off the post and scamper to safety.