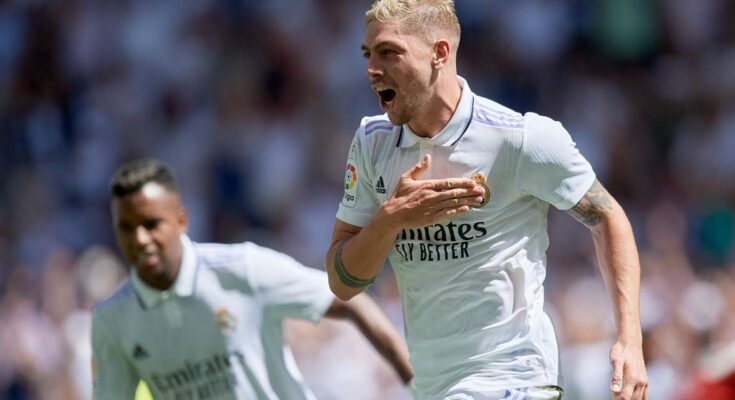 Real Madrid returned to the LaLiga summit after coming from behind to beat Mallorca 4-1 at the Santiago Bernabeu.

The hosts fell behind as the in-form Vedat Muriqi headed Mallorca into the lead, but Federico Valverde equalised before half-time with a marvellous individual effort.

Carlo Ancelotti’s side completed the turnaround 18 minutes from time with Vinicius Junior finding the net for a fourth successive LaLiga game, before another impressive solo goal from Rodrygo and Antonio Rudiger’s first strike for the club late on tied things up.

Los Blancos remain the only team in the big five European leagues to boast a 100 per cent record this season, having won their opening five league matches for the first time since 2009-10.

Mallorca had not won at Madrid since May 2009 but Muriqi sounded a warning for the visitors inside the opening minute.

Latching onto Martin Valjent’s long ball, the striker cleverly escaped the advancing Antonio Rudiger before his powerful volley was beaten away by Thibaut Courtois.

Dani Ceballos and Rodrygo tested Predrag Rajkovic at the other end, but Mallorca took a surprise lead in the 25th minute as an unmarked Muriqi headed home Lee Kang-In’s free-kick for his third goal of the season.

Madrid equalised in emphatic fashion in first-half stoppage time; Valverde embarking on a wonderful run from deep inside his own half, before firing into the top corner from 20 yards.

Lucas Vazquez curled a 25-yard effort narrowly wide just after the hour mark before Mallorca squandered a glorious opportunity to regain the lead; substitute Antonio Sanchez shooting wide with only Courtois to beat.

It proved costly as Madrid edged their noses ahead in the 72nd minute. Rodrygo burst into the heart of the visitors’ defence before feeding Vinicius, who neatly clipped the ball beyond the advancing Rajkovic.

Rodrygo then sealed the points with a minute remaining as he embarked on a strong, jinking run into the box, evading several challenges before slotting, which was followed by Rudiger volleying home a Toni Kroos free-kick at the far post in stoppage time.