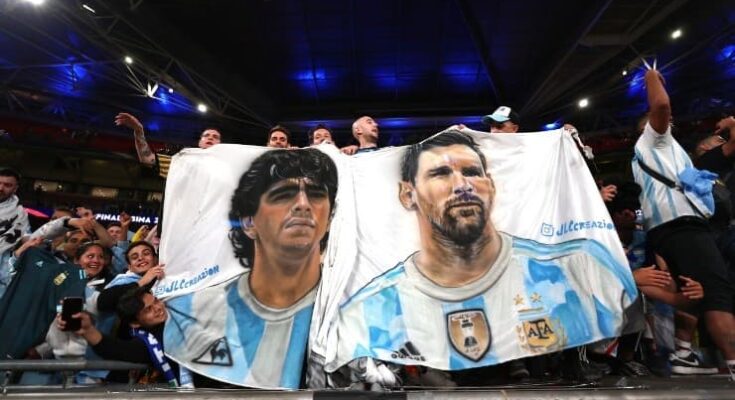 The success story of the Argentina National Team in the FIFA World Cup, which includes a couple of editions won, would not have been possible without men like Lionel Messi and Diego Maradona whose goals have contributed to it. Meet Argentina’s top scorers in this tournament.

A total of 80 national teams have participated in the World Cup at least once. This figure is less than half of the federations registered with FIFA. If we’re talking about a group of championship teams, the filter is much bigger. That’s the value of teams like Argentina, who will be looking to add to their legacy at Qatar 2022.

The Albiceleste will be playing in their 18th FIFA World Cup, bringing them level with Italy for the number of editions played. The two share third place in this category, behind Brazil and Germany. Argentina has not participated in this tournament since 1970.

With the responsibility of being one of the 8 national teams that managed to win the FIFA World Cup at least once, Argentina will be one of the favorites for the title in Qatar 2022 as they have players who will hope not to disappoint the great performances of those players who have defended the same jersey in the past editions.

Argentina’s history at the World Cup is simply great. Perhaps the only item that does not fully reflect this is the fact that they have won “only” two editions of this tournament, Argentina 1978 and Mexico 1986. Because even the goals scored statistics reflect his strength.

After the first final in the history of the World Cup, the Albiceleste are the third national team with the highest number of goals scored, with 137, after the two giants of the competition (Brazil and Germany with 229 and 226). and over Italy, who have 9 goals less.

With 144 matches played, Argentina boasts its historical scoring quota in World Cups thanks to the collaboration of true heroes who have brought it championships or, failing that, runner-up finishes. Since Uruguay 1930, more than 92 years ago, an Argentinean scored the most goals in this tournament.

Guillermo Stabile, with eight goals, and Mario Kempes, with six, have been the Albiceleste‘s two leading scorers at the FIFA World Cup. But there are also worthy runners-up Diego Maradona in 1986, Gabriel Batistuta in 1998 and Gonzalo Higuain in 2010.

This list will include those players who have scored four goals or more in their participations with Argentina in FIFA World Cups. Expected names such as Maradona or Messi are on the list, but also heroes who broke through with their talent to earn a place in the history of the Albiceleste.

Nicknamed Batigol (a reference to the superhero Batman), he is a true legend in Argentina. In the pre-Messi era, he was the top scorer for his national team with 56 goals. Ten of them in 3 World Cups played (1994, 1998 and 2002). Unfortunately, his individual success was never matched by his collective success.

Little can be said about the late Diego Armando Maradona. For many, the best footballer in history, but for all of us, one of the best 3 undoubtedly. He played in four World Cups and with his 8 goals he led his Argentina to a championship and a runner-up in consecutive editions.

Much has been said about Lionel Messi “only” needing to win a FIFA World Cup to be able to fight with Maradona and Pelé for the title of the best in history. Lio already knows what it’s like to play in a Final and lose it, in 2014. In Qatar 2022 he will play his fifth edition and will make history in that category, but with an outstanding tournament in front of the opponent’s goal he could climb up this list, maybe even reach the top.

With 18 games played, he is the fourth Argentine with the most games in World Cups. Kempes’ zenith came in Argentina 1978, the only edition in which he was able to score goals, which gave his country its first title in this tournament. He also played in the 1974 and 1982 editions.

One of the recent favorite villains of the Argentinean fans. Nothing could be more unfair, as the former Real Madrid striker is the sixth best scorer of the Albiceleste with 31 goals. In World Cups, he scored in two of the three in which he participated (2010, 2014 and 2018), and played in a Final, in Brazil, in which he had a scandalous mistake for which he is unjustly condemned.

Argentina’s scorers in FIFA World Cups are many and with a more than acceptable amount of goals scored. As exemplified by this list of players who scored goals in the editions they played. Among them Jorge Valdano, Real Madrid star and world champion in Mexico 1986, and Hernan Crespo, who played in 3 World Cups and shone in Italian soccer.