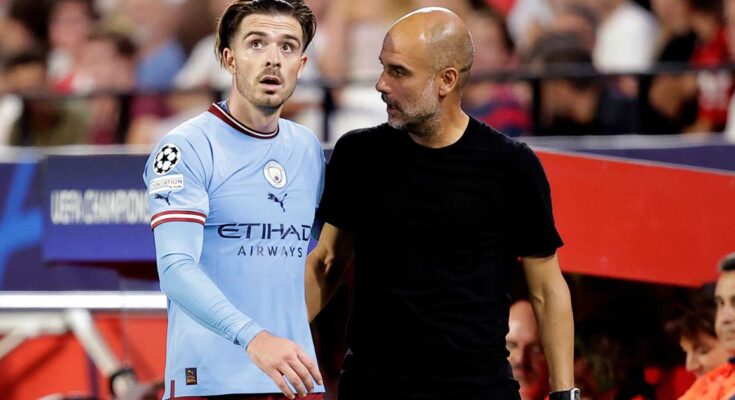 Guardiola was not interested in lamenting a lack of goals and assists from Grealish, instead focusing on what he likes about the midfielder.

Manchester City boss Pep Guardiola has come to the defence of record signing Jack Grealish, saying he is not being judged on how many goals and assists he creates during his time on the pitch.

Grealish, 27, joined the club last year in a £100m move that made him the most expensive British player in history, but has only managed six goals and four assists for City.

He has started one Premier League game and both UEFA Champions League games so far this season, although he has been substituted in both continental games, including last week’s 2-1 win against Borussia Dortmund.

When his performance against Dortmund was called into question, Guardiola sought to shift the blame from Grealish and pointed the finger at his supporting cast for not making life easy for him.

“He started really well but had to stop with an ankle problem and we were lucky it wasn’t worse,” he said.

“The last game in the final third he was the only one up front who made aggressive one-on-one runs, but he [couldn’t] assist [because] he didn’t have his teammates in the box, so we kept him isolated. When he went against the full-back, there was only Erling [Haaland ].

“[Ilkay] Gundo[gan] wasn’t there, Kevin [De Bruyne] wasn’t there and they should be there. In the first half especially with the ball we didn’t make any moves to help the players who had the ball and give him more options to make it easier.”

Guardiola added: “I know him and I’m more than happy and excited about what he’s doing. Now… it’s time to bring back some of his dynamism that he had at the start of the season.”

The multiple Champions League manager was adamant that goals and assists alone are not enough to judge a player like Grealish and shared what he looks for in a midfielder.

“We didn’t sign incredible goals or assists at Aston Villa,” he said. “It was another reason, and when he played, he did.

“He also competes with top, top players and he knows it perfectly, but he never complains about it.

“He’s such a nice guy and in games when he’s not playing he’s the first one to help the team and he’s always there in training. I’m pleased with his behavior and everything.

“I want to score goals and I want to assist and so does he, but it’s not about that. It’s about his contribution without the ball and what he can produce for others and the many, many things he’s capable of doing.” .”