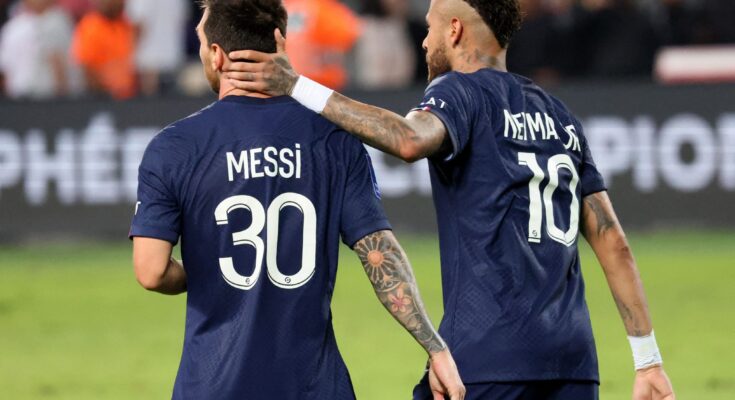 Former Barcelona duo Neymar and Lionel Messi appear to be thriving in Ligue 1 in the new season, with the two of them scoring a chunk of goals for PSG in these early parts of the campaign.

They even lead Europe in assists, with both having recorded six so far this season in Ligue 1. Their collective brilliance has served as a breath of fresh air for PSG fans, especially after an indifferent 2021/22 campaign.

In a recent interview with DAZN, Neymar even opened up about Messi’s struggles, especially during his debut campaign in Paris.

“Messi’s first year at PSG? I’ve known Leo for a long time. I was able to help him. It is difficult to make such a change because he has been in Barcelona for many years and now everything has changed for him and his family,” he said.

Messi really struggled at PSG last season, scoring just six goals in 26 league games. Despite collecting 15 assists, the Argentine has been criticized for his lack of influence in PSG’s title chase.

However, Neymar believes Messi is now improving and settling in Paris.

“It’s difficult, but I think he’s getting better now and feels at home. I want him to have fun and I want us to have fun together. We know that we have a lot of things and difficulties ahead of us, but I am sure that we can do it,” he added.

The improvement was evident in Messi’s numbers for the new season. In just eight competitive games so far, the former Barcelona superstar has collected four goals and six assists. His teammate Neymar has an even better record, having been involved in 16 goals in just eight games.

PSG fans will be hoping that the two can continue their exemplary form for the rest of the season as they look to not only defend their Ligue 1 title but also do well in the UEFA Champions League.