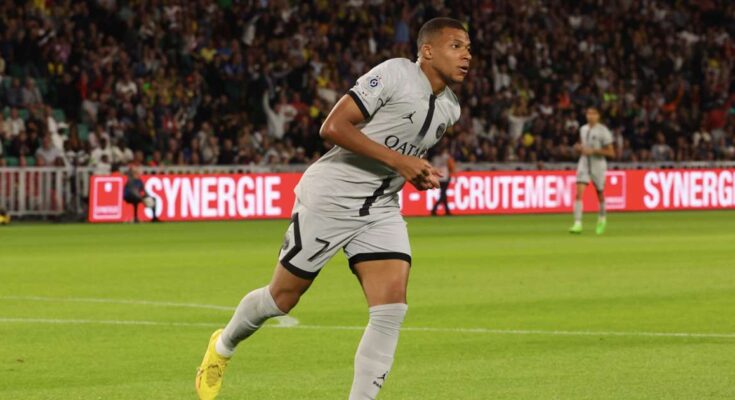 Kylian Mbappe scored twice as Paris Saint-Germain made it five wins from six Ligue 1 games this season with a 3-0 win over 10-man Nantes on Saturday.

Mbappe put the champions in front shortly before half-time with his sixth league goal of the campaign before Nantes wing-back Fabio was given his orders for a high challenge.

The France international grabbed his second early in the second half before Nuno Mendes added a third as Christophe Galtier’s men claimed maximum points with minimum fuss.

The result saw PSG return to the top of Ligue 1 after Marseille briefly usurped them earlier in the day with victory over Auxerre, while Nantes remained in 10th place.

Samuel Moutoussamy fired ahead for Nantes early on, while Danilo Pereira and Marquinhos went close at the other end as the visitors began to flex their muscles.

Mbappe then deservedly put PSG ahead in the 18th minute when he slotted past Alban Lafont after being played in by Lionel Messi at the end of a sharp counter-attack.

The game was effectively put out of their reach in the 54th minute when Mbappe poked home from six yards after being picked out by Messi, the goal ultimately awarded after a lengthy VAR review for possible offside.

Substitute Neymar inexplicably hit the target at his mercy, but his blushes were spared when Mendes fired in the rebound for PSG’s first goal.

What does it mean? Nantes blown away by relentless champions

Nantes kept PSG at bay for 18 minutes, yet as soon as Mbappe superbly finished off a flowing move there was only going to be one winner.

The result means PSG have now won seven of their past eight Ligue 1 away games, scoring a whopping 34 goals and conceding just five in that time.

Mbappe will get the headlines after his brace, but Messi was at his unplayable best here.

The Argentina maestro laid on both of Mbappe’s goals from two of his three key passes – a total not bettered by anyone on the pitch.

Nantes were already 1-0 down when Fabio raked his studs down Vitinha’s leg and any hopes they had of getting back into the game were vanquished with his dismissal.

Boss Antoine Kombouare will not be pleased with the former Manchester United man’s recklessness.

Both sides are in European action in midweek, with PSG starting their Champions League campaign at home to Juventus on Tuesday and Nantes hosting Olympiacos in the Europa League two days later.