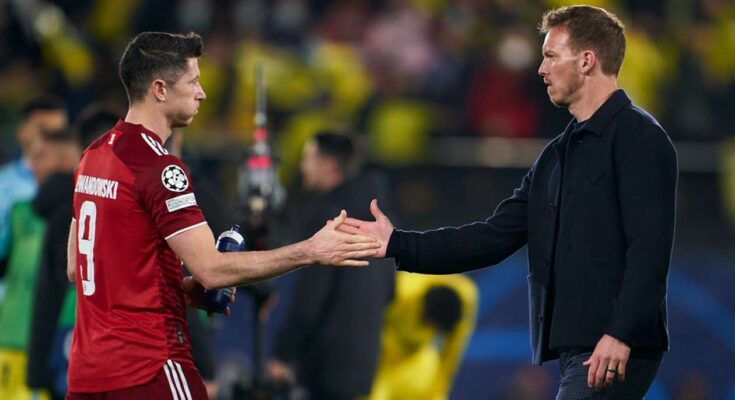 Julian Nagelsmann expressed his desire to see Robert Lewandowski receive a warm welcome on his Bayern Munich return, as he backed the striker to continue his fine start to life at Barcelona.

Lewandowski, who scored 238 Bundesliga goals during his eight-year spell with the Bavarian giants before heading to Camp Nou in July, has made a stunning start to his Barcelona career.

The Poland international has scored six goals in his first five LaLiga games and kicked off the style with a hat-trick in Barca’s 5-1 Champions League win over Viktoria Plzen last week.

Lewandowski will make a quick return to Munich with his new club for Tuesday’s huge Champions League clash and despite the less-than-friendly nature of his exit, Nagelsmann believes he should receive a warm welcome.

“If I see him before [the match], I’ll definitely shake his hand. I’m not sure if I’ll see him before, usually not,” Nagelsmann said.

“I’m looking forward to our fans welcoming him back. When a player has been so strong for the team over the years, I think that’s important.

“He was an important part of the Bayern family. We had a personal conversation a few weeks ago, not about football. I’m looking forward to seeing him again.”

Asked about Lewandowski’s start to life in Spain, Nagelsmann added: “I think he can play at this level for a few more years, I’m not sure how many goals he can score this season, I’m not a genius.

“I think that will be enough. He usually scored 40 plus, so I think he can do it in the Spanish league as well.”

“I’m not sure if he’s the most dangerous, but he’s certainly one of their most dangerous players, the one who can score the most goals. They have great solutions there.

“Lewandowski always has great runs and positions in the box. He’s the most dangerous in front of goal, but if he doesn’t get a lot of balls it’s difficult for him.”

Nagelsmann, who coached Lewandowski as he brought up a half-century of goals in all competitions last term, is well aware of his talent and believes Dayot Upamecan’s past experience of facing him could help Bayern.

“I have a lot of positions that I’m pretty clear on,” Nagelsmann added. “Upamecano has memories of playing against Lewandowski when he was at RB Leipzig. He also knows him from our practice.”

While Upamecano is set to start at the Allianz Arena, Leon Goretzka is not as Nagelsmann looks to relieve the midfielder following his injury.

“The position next to Joshua [Kimmich] will be [Marcel] Sabitzer,” Nagelsmann said.

“I spoke to Leon, it was my decision to keep him [against Stuttgart on Saturday]. We decided to keep him for 94 minutes, that was a long time for him after injury. He reacted well to them and he feels good.

“Having to start from the start is not going to happen, we need him for the whole season and we don’t want to give him too many minutes at the start.”

Barcelona, ​​meanwhile, have suffered eight Champions League defeats to Bayern – twice as many as they have lost to any other opponent (4 against Milan, Chelsea and Paris Saint-Germain).

Bayern also boast a 100% record against the Blaugrana in the group stage and beat them twice in the competition last term, but Nagelsmann wants to draw a line behind those past fixtures.

“We know Barcelona. They have a completely new mindset. You can erase the last few games against Barca, they are a completely different team, very aggressive,” he said. “It reminds us of the time when Xavi was still playing himself.

“They have a great back eight in Gavi and Pedrim who also have great pressing actions. There is a lot of development for the team, Xavi has done a few things really well in the last few weeks and months.”

“They want to attack in a new way and they will be very difficult opponents tomorrow.”