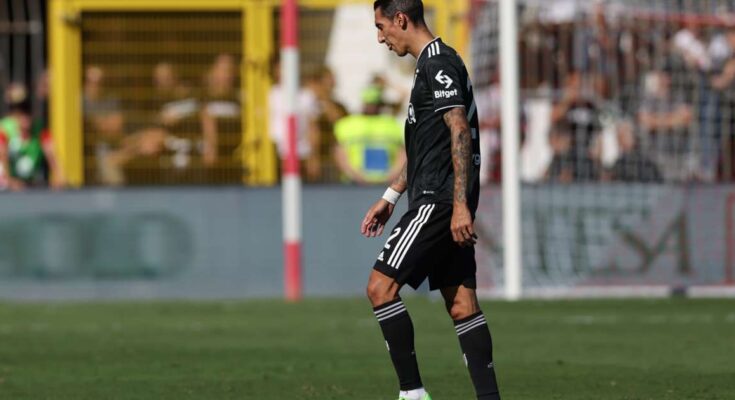 Angel Di Maria saw red as struggling Juventus fell to a 1-0 defeat at Monza in Serie A, with substitute Christian Gytkjaer scoring a 74th-minute winner.

With head coach Massimiliano Allegri absent from the bench due to suspension, the Bianconeri put in a poor performance when Di Maria was sent off before half-time for an elbow on Armando Izzo.

Gytkjaer was punished for a careless performance by the visitors in the 16th minute when he hit Patrick Ciurria’s cross.

A first league defeat of the season for Allegri’s men means they lose more ground on the Serie A front runners, adding to the manager’s scrutiny.

Monza got off to a great start with Nicol Rovella, on loan from Juventus, flashing a volley wide of the left post.

Izzo missed a great chance to break the early deadlock when he headed in a Marlon Santos cross before Patrick Ciurria’s side-footed effort was just wide.

Juventus got off to a tough start, and it wasn’t until the 28th minute that Dušan Vlahovič finally registered his first shot on goal with a tame effort that was easily saved.

The Bianconeri were down to 10 men before the break as Di Maria saw red for an offending elbow to Izzo’s chest as the two battled for possession.

The home team’s Dany Mota should have done better after the break when he turned a cross around the post before Juventus goalkeeper Mattia Perin made a smart stop to keep out Carlos Augusto’s powerful shot.

The hosts finally got their reward when Gytkjaer smashed home from Ciurrie’s deflected cross to spark wild celebrations from the home faithful.

Juventus pushed for an equalizer but Moise Keane’s easily saved header was as close as they came, leaving the Turin giants on a run of five games without a win in all competitions.