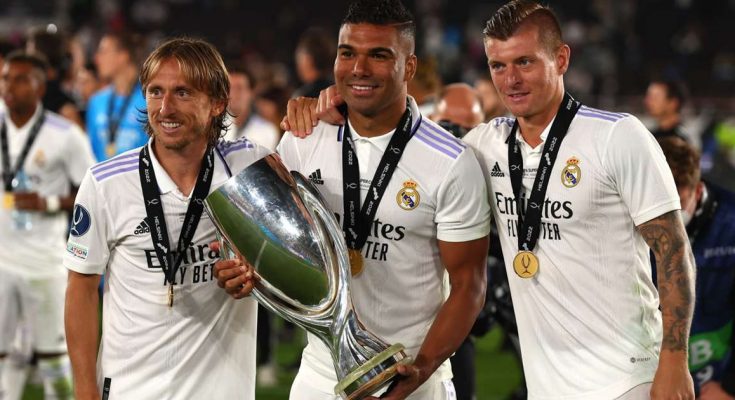 Luka Modric believes Real Madrid are well-equipped to thrive in the aftermath of Casemiro’s move to Manchester United, as he praised Los Blancos’ midfield options.

Casemiro left Madrid to join United last month in a £60m (€70m) move, but his departure has not stopped Carlo Ancelotti’s men from making a good start to the new season.

Before Sunday’s home clash with Mallorca, Real Madrid had won all four of their LaLiga games and opened their Champions League defense with a 3-0 thrashing of Celtic on Tuesday.

Madrid are the only team with a 100 per cent record in Europe’s top five leagues this season and are now bidding to win their opening five league games for only the second time in the 21st century, also in 2009-10.

Among the Madrid midfielders, new signing Tchouameni leads in the number of minutes played this season in LaLiga (328), followed by Valverde (265), Modrič (260) and Camavinga (222). All four have made more starts than the two led by Toni Kroos who played 173 minutes.

Modric believes the strength of Madrid’s options means Casemiro will not be missing, telling the club’s website: “We’ve started really well this year and we have a strong squad.

“In the midfield we lost an important player in Casemiro, but we have a lot of other good players to replace him and do a good job.

“Tchouameni has adapted really well. This is Camavinga’s second year and he had a great first year.

“Kroos has been here for a long time. Valverde also does really well in any position. [Dani] Ceballos helps the team a lot so we are well equipped for that position.”

Meanwhile, Eden Hazard completed Madrid’s trip to Celtic by completing a 33-pass move for his third goal. It is the longest unbroken run for any of Madrid’s 434 goals in the competition since Opta data began in 2003-04.

But on Saturday, Ancelotti claimed the Belgian striker’s intervention was not representative of Madrid’s change in style of play.

“The game was almost over and we wanted to finish it with long possession, but the statistics say that it is easier to score under 10 passes. The numbers show that very few goals are scored from more than 10 passes.

“You could say that playing a possession-based game is in vogue and has seen success in recent years, but football is changing and becoming more direct.

“Possession football is less popular than recently in all countries.”