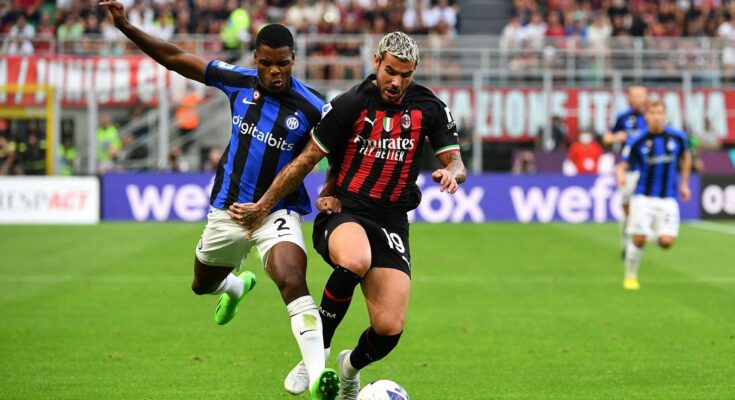 Rafael Leao marked his 100th Serie A appearance in style with a derby double to help Milan beat Inter 3-2 at San Siro.

The Portuguese winger added an assist to the negotiations as he proved to be a first class act as he remained in Milan due to recent interest from Chelsea.

Leao’s effort enabled Milan to win a second league derby in a row over their city rivals, with whom they share the famous stadium. It is the first time they have done so since the first season in 2010-11, when Milan won their first two league derbies under Massimiliano Allegri.

Milan’s defense crumbled in the 21st minute to allow Brozovic a clear drive on goal, with the midfielder taking a pass from Joaquin Correa and slotting into the bottom left corner.

Eight minutes later, Leao came up with Milan’s equaliser, a left-footed shot that flew past Handanovic, who got a fingertip to the ball but couldn’t stop it from finding the right-hand corner.

It was Giroud who put them in front in the 54th minute, Lea’s cross from close range from the left touchline finding the French striker who curled a shot past Handanovic into the net. The goalkeeper should have done better.

Inter’s defense could hang their heads in shame at the defending that allowed Lea to slip through and score his second and Milan’s third goals in the 60th minute. The forward’s nimble work was impressive, but the lack of tackles was embarrassing.

A lifeline for the Nerazzurri came when Dzeko met Matteo Darmian’s low cross and Milan goalkeeper Mike Maignan parried another shot from the Bosnian as Inter searched in vain for an equaliser.