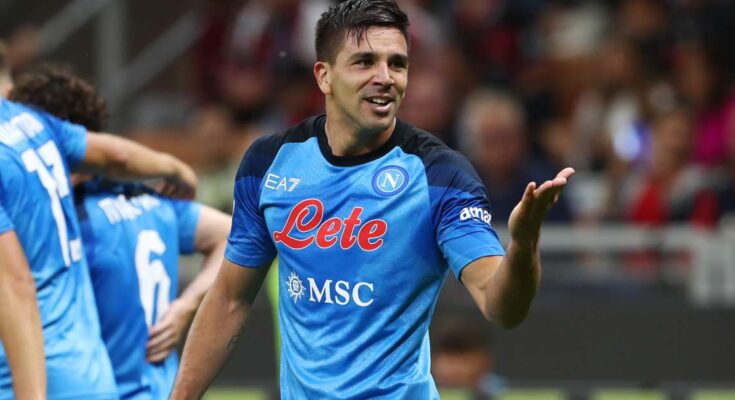 Olivier Giroud thought he had snatched a point for Milan against Napoli, but substitute Giovanni Simeone had other ideas.

Napoli returned to the Serie A summit as Giovanni Simeone’s 78th-minute header sealed a 2-1 win over previously unbeaten Milan at San Siro on Sunday.

Milan had 11 shots to Napoli’s three in a dominant first half, but the visitors took the lead shortly after the break when Matteo Politano stroked home from 12 yards after Sergino Desta’s clumsy foul on Khvicha Kvaratskhelia.

Olivier Giroud equalized for Milan in the 69th minute, but substitute Simeone pounced with the winner to seal a huge win for Luciano Spalletti’s side, who remain unbeaten in the league this season.

The result means Napoli leapfrogged Udinese and Atalanta at the top of the table, while Milan slipped to fifth after their first Serie A defeat in 23 games.

Milan started strongly and were denied the lead in the 13th minute when Giroud’s strike from 12 yards was superbly tipped onto the crossbar by Alex Meret.

The Napoli goalkeeper was called into action again shortly before the half-hour mark when he headed home Rade Krunice from a corner.

Napoli offered almost no attacking threat in the first half, yet took the lead 10 minutes after the break when Politano scored from the spot after substitute Dest fouled Kvaratskhelia – a decision given after referee Maurizio Mariani was instructed to check the pitch monitor. VAR.

Meret denied Junior Messias soon after Giroud pulled Milan level with a simple finish from eight yards after fine work down the left from Theo Hernandez.

However, their joy was short-lived as Simeone crept into the area to glance in Mario Rui’s cross from the left wing.

Milan should have grabbed a point with four minutes remaining but substitute Pierre Kalulu inexplicably hit the crossbar and only Meret beat him from eight yards.