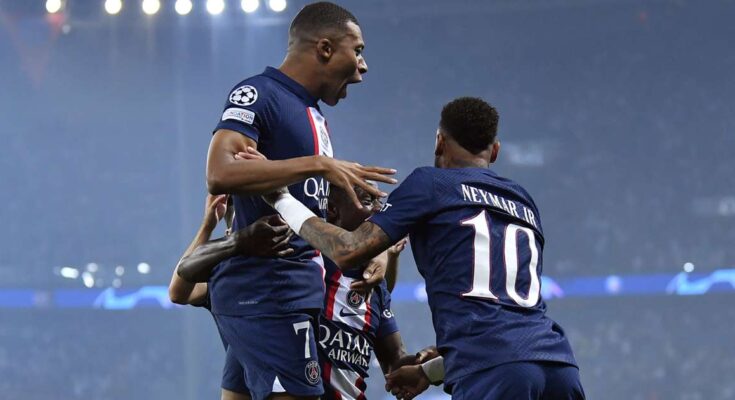 The PSG forwards have started the season in great scoring form, but their relationship has faced intense scrutiny after appearing contentious at times.

It came under renewed scrutiny after Neymar reacted angrily to Mbappe ignoring the chance to pass him for a likely tap-in in the 2-1 Champions League win over Juventus.

That moment early in the second half of Tuesday’s game saw Mbappe charge down the right wing after receiving a pass from Lionel Messi, and he shot wide before heading the ball for the advancing Neymar. The French international was chasing a hat-trick with two goals already in the game.

Mbappe faced criticism earlier in the season for his actions during the 5-2 win over Montpellier, which included a public altercation with Neymar.

France’s Mbappe missed a penalty in that match but felt he should have had another chance from 12 yards when PSG won their second free-kick, but Neymar disagreed and took charge to score.

A seemingly upset Mbappe then did not celebrate his own goal, and after the Juventus match, Galtier had a familiar topic in hand again.

The PSG head coach said on Friday: “The relationship is very good. That’s true. They are often together in training.

“There is nothing else negative about this part of the game.

Mbappe said ahead of the Juventus match that his relationship with Neymar has been “colder or hotter” in the past, with moments when they were “best friends” and others when they were more distant.

Galtier could rest one or more of his attacking forces when PSG play Ligue 1 Brest on Saturday, ahead of Wednesday’s Champions League trip to Maccabi Haifa.

When asked if he could consider resting all three of his star strikers – Messi, Neymar and Mbappe – Galtier’s answer was a resounding “No!”.

But he confirmed that one could escape, saying: “It’s possible.”

PSG have 16 points from six games so far and have already scored 24 Ligue 1 goals, with only Manchester City’s Erling Haaland (10) scoring more league goals than Neymar and Mbappe in Europe’s top five leagues.

Brest is the only team Neymar has played against in Ligue 1 without recording a goal or assist; however, he has only faced one in his career so far.

Anything other than a convincing home win for the leaders against their 17th-placed side would be a surprise as PSG have won each of their last nine Ligue 1 games against Brest. Among current Ligue 1 teams, they only have a longer winning streak against Angers (12 games).