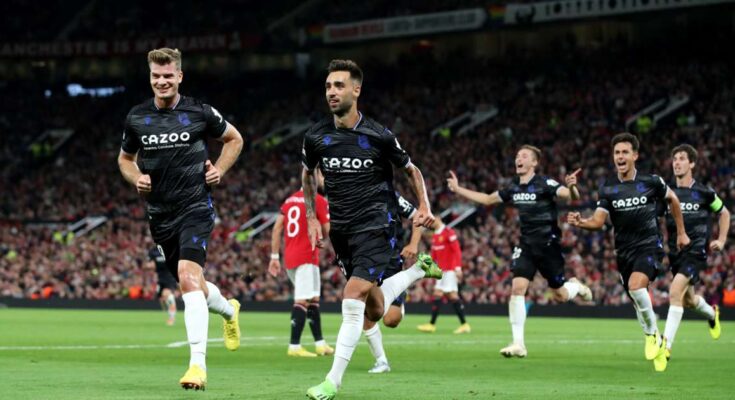 Old Trafford held a silence before kick-off in honor of Her Majesty, who died earlier in the day aged 96, while players from both sides wore black armbands in honor of the monarch.

Cristiano Ronaldo, who started for only the second time of the season, was close on a number of occasions for the home side, who recorded just three shots on goal in the entire match.

The Red Devils’ four-game winning streak was ended shortly before the hour mark when Mendez slotted home from 12 yards after substitute Lisandro Martinez had interfered in the area.

United were comfortably the better team in the opening 30 minutes, yet failed to carve out any clear-cut chances.

Ronaldo thought he had given his side the lead 10 minutes before the break, but his powerful header was ruled out after being caught in an offside position.

The Portuguese superstar inexplicably headed wide of the goal right after the restart and then just over the edge of the penalty area.

La Real went ahead in the 58th minute when Mendez fired home from the spot when David Silva’s shot hit Martinez’s arm.

Erik ten Hag struck at half-time for Bruno Fernandes and second-half Jadon Sancho and Alejandro Garnach, but United were unable to find a way through the visitors’ stubborn backline in the closing stages.

What does it mean? United’s home run ends

The defeat was United’s first in 19 home games in the Europa League – a run which began with victory over FC Midtjylland in February 2016.

Meanwhile, it was La Real’s first ever win against English opponents in Europe at the seventh asking.

Mendez put in a hardworking performance and earned match winner status. The former Celta Vigo player scored one in two shots – the most of any La Real player – while his total of two key passes was bettered by no other player on the pitch.