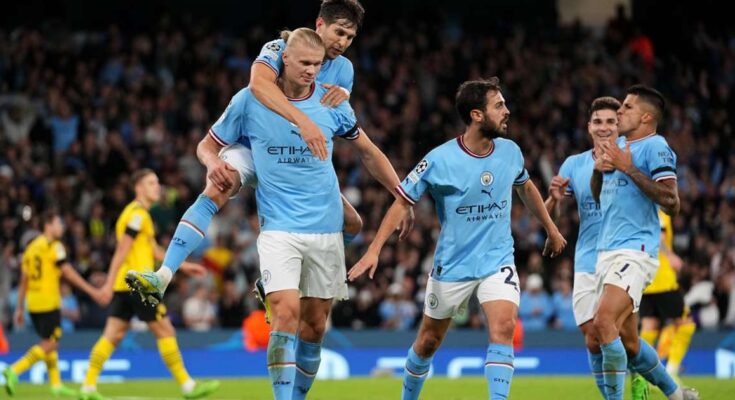 Late goals from John Stones and Erling Haaland helped Manchester City recover from a goal down to beat Borussia Dortmund 2-1 in the UEFA Champions League.

the home side were leggy and lethargic for most of the evening as a well-drilled Dortmund, knowing they could go long periods without the ball, sank deep in frustration to Pep Guardiola’s side.

BVB even threatened to walk away with a shock win when Jude Bellingham cleverly headed Marco Reus’ cross past Ederson just before the hour mark.

But after Stones rocketed City level, with an effort that Alexander Meyer should have really saved, Haaland stepped up to score his 13th goal of the season – meeting Joao Cancelo’s stunning cross to head the ball home from six yards.

The first half at the Etihad was anything but what you’d expect. Dortmund were compact and organized at the back – and mildly dangerous on the crossbar – while City were toothless in attack despite enjoying the lion’s share of possession.

Dortmund’s control of possession was highlighted by the fact that Erling Haaland touched the ball just 11 times in the opening 45 minutes – comfortably the fewest of any home player in the field and five fewer than Ederson.

Kevin De Bruyne was also ineffective in the opening third as the visitors’ low block limited the half-spaces the Belgian tends to operate in, although Guardiola neglected to make any changes at the break.

But instead of getting better, as it often does when City have a poor first 45, things turned sour just before the hour mark.

Giovanni Reyna’s corner was half-cleared and Reus, who should have really given Dortmund the lead minutes earlier after a fierce counter-attack, controlled neatly before guiding the ball back into the penalty area.

An alert Bellingham, who had been brilliant all evening, stood there and nudged past former Dortmund defender Manuel Akanji to nod past a helpless Ederson in the City goal.

However, City never know when they are down and out and with 10 minutes remaining, the game turned on its head. Stones first collected De Bruyne’s pass to fire a rocket into the top corner from 25 yards, before Cancelo whipped a superb cross into the box with the fastest Haaland on the end of it.

It was rough on Dortmund, who were far more organized than many would have expected before the game, but Edina Terzice walked away with nothing from a spirited performance.

GK: Ederson – 5/10 – A spectator for most of the evening, though he could have been beaten on two or three occasions.

RB: John Stones – 7/10 – Not a natural right-back, that much is obvious, but boy can he strike a ball from long range.

CB: Manuel Akanji – 6/10 – Looks composed in everything he does. A shrewd acquisition but not a game changer.

LB: Joao Cancelo – 7/10 – Played a ridiculous ball in for Haaland’s winner – not the first time the Portuguese has displayed such outrageous skill.

DM: Rodri – 6/10 – Broke play up a number of times and ticked along in his usual robotic fashion.

CM: Kevin De Bruyne – 6/10 – Not the Belgian’s finest evening but he did play a couple of delicious balls in behind.

RF: Riyad Mahrez – 4/10 – One dimensional in his play, Mahrez insisted on doing everything with his left foot and slowing the pace down. Allowed BVB to hold their shape with ease.

CF: Erling Haaland – 7/10 – Didn’t have much of an impact for 83 minutes but took centre stage when his side needed him.

LF: Jack Grealish – 3/10 – Only interested in cutting inside where he invariably ran into trouble. Looks a million miles away from being a £100m player.

SUB: Phil Foden (58′ for Grealish) – 6/10 – Raised the intensity for City, something Grealish most certainly didn’t do.

SUB: Julian Alvarez (58′ for Mahrez) – 6/10 – Likewise, Alvarez injected a bit of fresh impetus and his introduction allowed De Bruyne to display his talents out wide.

Manager: Pep Guardiola – 6/10 – Should probably have made changes at half-time and will be disappointed with his team’s efforts for the first hour. Won the game though so, ultimately, job done.

Player of the Match: Mats Hummels