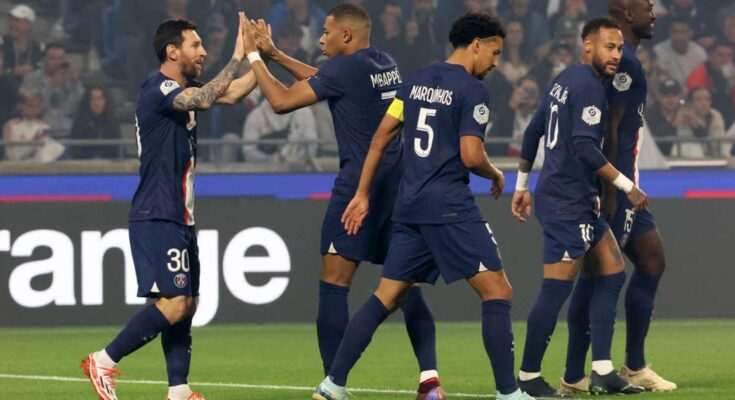 Lionel Messi’s early strike proved enough for unbeaten Paris Saint-Germain to beat Lyon and go back to the top of the Ligue 1 table.

Lionel Messi fired Paris Saint-Germain back to the Ligue 1 summit as his early goal secured a 1-0 win over Lyon.

Despite PSG dominating the Groupama Stadium for long stretches, Christophe Galtier’s side had to fend off a determined Lyon in the second half to claim maximum points.

PSG’s victory means they leapfrog Marseille at the top of the table after extending their winning streak to six games across all competitions.

Defeat for Lyon ended their run of eight league wins in a row at home – the longest stretch of any of Europe’s big five leagues.

PSG took the lead after just five minutes when Messi headed past Anthony Lopes after a neat one-two with Neymar.

Messi was then denied from a tight angle as the visitors dominated the opening 20 minutes, while Lopes blocked Kylian Mbappe’s 20-yard effort.

PSG almost doubled their lead within a minute of the start of the second half when Castello Lukeba headed Messi’s spot-kick off the line.

Lopes then needed superb reflexes to prevent Neymar and Messi from extending the lead, while Thiago Mendes’ superb last-ditch save also thwarted Neymar.

The visitors survived a scare when Marquinhos blocked Moussa Dembele’s header before Messi was denied in the late second when Lopes made a superb save from his free-kick. Sergio Ramos was denied by the offside flag as he tucked in the loose ball.