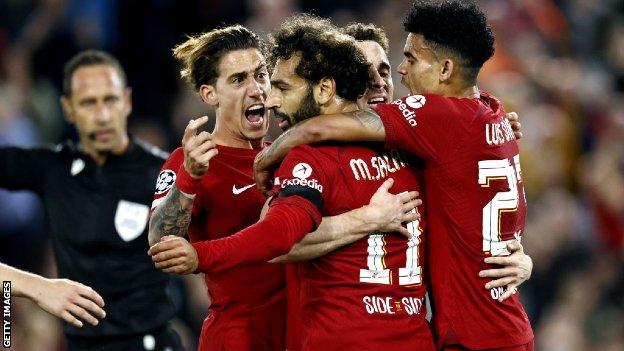 Liverpool bounced back from their disastrous defeat to SSC Napoli to beat a spirited Ajax team at Anfield in the UEFA Champions League on Tuesday evening.

Mohamed Salah opened the scoring for the Reds before they were pegged back by a strike from Mohammed Kudus. After a frustrating second half, defender Joel Matip appeared on the dying embers to give Jurgen Klopp’s men an important three points.

As expected, after last week’s disappointment, Liverpool fired out of the blocks in the opening twenty minutes and took the lead through Salah. The Egyptian superstar raced past Daley Blind and, after being found by Diogo Jota with a deft pass, slotted comfortably past Remko Pasveer in the Ajax goal.

It was almost two moments later when a poor equalizer fell to Luis Diaz just inside the penalty area. Diaz’s subsequent shot at goal, controlling the ball well with his chest, was slightly wayward, just wide.

Minutes later, the other member of Liverpool’s front three came close to scoring, firing a shot from 25 yards off the post.

After that flurry of chances, it was Ajax who scored. The goal came after some lax defending from Trent Alexander-Arnold, who allowed a simple ball from the back to find Steven Berghuis, who then pulled the ball back to Kudus. After checking, the 22-year-old slotted the ball past Alisson and into the net, punishing Alexander-Arnold for a shocking poor save.

The Reds continued to press after conceding, with their next chance falling to Virgil van Dijk. The towering center back wriggled from his post and managed to get his head on TAA’s corner but his resulting effort on goal was well saved by Pasveer.

Pasveer was called into action again before half-time, saving two shots from Alexander-Arnold in quick succession to keep the game level at the break.

Liverpool somewhat lost their way offensively at the start of the second half as Ajax began to find a few more ways to stifle their attacks before they developed. The key to the visitors’ improvement in the defensive third proved to be Calvin Bassey, who came through time and again for his side with blocks and saves.

Despite the Reds having most of the ball, Ajax would be the team that would come closest to breaking the deadlock in the 75th minute. Brilliant work from Dušan Tadič down the right wing culminated in the former Southampton man hitting the ball onto the back post and into the path of Daley Blind, who, despite being unmarked and about six yards from goal, headed over the bar.

That blind chance looked to wake Liverpool up a bit in the final period as substitute Darwin Nunez then spurned a great chance to put Liverpool ahead in the 83rd minute. Quick interplay between Nunez and Salah on the edge of the box led to the former’s first-time effort at goal from 15 yards, but the effort was rather tame and rolled wide of Pasveer’s left-hand post. Moments later, Nunez was at the center of the action again, this time turning the provider to Diaz, who just couldn’t get onto a low drilled cross from across the six-yard box.

The goal finally came for Liverpool in the 89th minute when Joel Matip rose highest to nod past Tsimikas to earn his side a vital victory.

GK – Alisson Becker – 5/10 – Distribution was good all evening. He could do nothing about the goal. No one could’ve.

CB – Joel Matip – 8/10 – Decent on the ball throughout and then popped up with the winner.

CB – Virgil van Dijk – 6/10 – Denied a goal by a fine save from Pasveer in the first half. A threat from set pieces all night.

LB – Kostas Tsimikas – 7/10 – Set up with the winner with a fantastic corner kick delivery.

CM – Harvey Elliott – 5/10 – Still finding his feet in the Liverpool midfield. He looks a player, but needs time to settle and needs to improve defensively.

CM – Thiago Alcantara – 7/10 – Liverpool are an infinitely better team when he plays. It’s shame his injury record is so patchy.

RW – Mohamed Salah – 6/10 – Scored a much-needed goal after a difficult start to the season. Faded in the second half.

ST – Diogo Jota – 5/10 – Back in the starting XI and repaid his manager by setting up the opener. Really struggled to find space in and around the penalty area after that though.

LW – Luis Diaz – 5/10 – Spurned a decent chance to double his side’s lead in the first half. Worked hard but lacked the end product on the night.