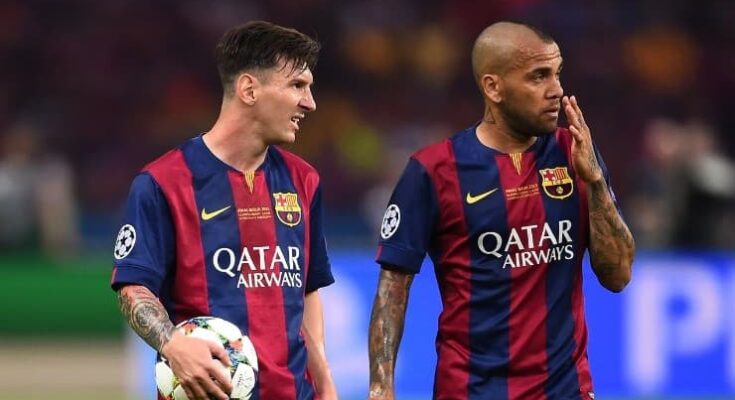 Lionel Messi is one of the greatest players in soccer’s history. He partnered with Dani Alves in Barcelona and now the Brazilian has revealed that the Argentinian could be the reason why he plays for 11 more years.

Dani Alves and Lionel Messi had one of the best partnerships in football during their time at Barcelona. They managed to win almost everything, but now that they’ve gone their separate ways, competition is growing for the Brazilian as he revealed the striker could be the reason he’s extending his career for another 11 years.

Barcelona’s right wing with Lionel Messi and Dani Alves was an absolute danger to their opponents. The pair got on very well and this partnership was a key part of the Blaugranas’ golden era.

But the Argentine forward and Brazilian defender then went their separate ways. Now, Messi plays for Paris Saint-Germain and Alves for Pumas UNAM, but Dani wants to extend his career for more years thanks to some actions taken by his former team-mate.

Dani Alves is the most successful footballer in history. He has won a total of 46 titles by 2022 and is hungry for more. But close behind him is Lionel Messi with a total of 41, which is why the Brazilian doesn’t want to retire any time soon.

“If Lionel Messi steals my record for most titles won, I might have to extend my career to 50 years to take it back,” Alves said in an interview with Hugo Sanchez for Star+.

When Dani Alves signed for Pumas UNAM, he said his choice was because he saw an opportunity to win titles with the Mexican side. Unfortunately, the team did not succeed and there is no talk of clubs that could win Liga MX this year.

At 39, Dani Alves isn’t thinking about retiring any time soon. The 35-year-old Messi has five less titles than the Brazilian, so there is a huge possibility that the Argentine will equal or even surpass him in titles.