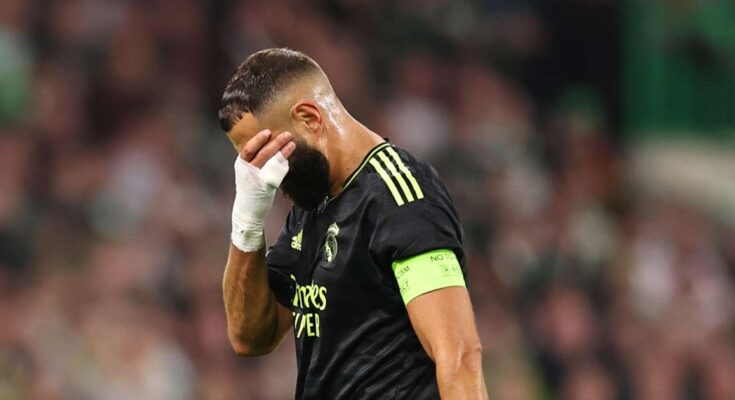 Karim Benzema will miss Real Madrid’s next two games but could return for the derby with Atletico Madrid, according to Carlo Ancelotti.

Benzema injured his knee in Madrid’s 3-0 win at Celtic in their opening UEFA Champions League group on Tuesday and it was feared he would miss a significant period as a result.

However, Ancelotti appeared to allay those concerns at a press conference ahead of Los Blancos’ clash with Real Mallorca on Saturday, saying the France international could not return for just over a week.

After Mallorca, Madrid host RB Leipzig in the UEFA Champions League and make a short trip next Sunday to face rivals Atlético.

“We will not force Benzema,” Madrid coach Ancelotti said. “He will definitely not play against Leipzig, but then we will see each other at the derby.

“Then if he can’t play [against Atlético], he won’t go to France [for the international break].”

Benzema was replaced after 30 minutes at Parkhead by Eden Hazard, who scored the third goal in the win, and the Belgian is likely to be tasked with filling the center forward spot against Mallorca.

However, Ancelotti does not want him to play like Benzema, saying: “Hazard did well when he came on against Celtic. I will field him again on Sunday. Let’s hope he repeats the great game.”

“I don’t expect [Hazard] to play like Benzema, but I want him to play well and link up with the other strikers.”

Ancelotti made it clear that there is no replacement for Benzema, with alternative options providing varying strengths in the final third, and singled out Vinicius Jr for praise. – who has scored in each of his last four games in Madrid.

He said: “We don’t have Karim and because he is the best striker in the world, there is no substitute for him in the market.

“But he can be replaced by other players with other qualities.

“Vinicius is more and more consistent in finishing, in scoring goals. It is difficult for him to fail in front of the goal, he has improved a lot there.

“I want to emphasize that he continues to maintain a good attitude, with a lot of humility, work – he wants to improve every day.”