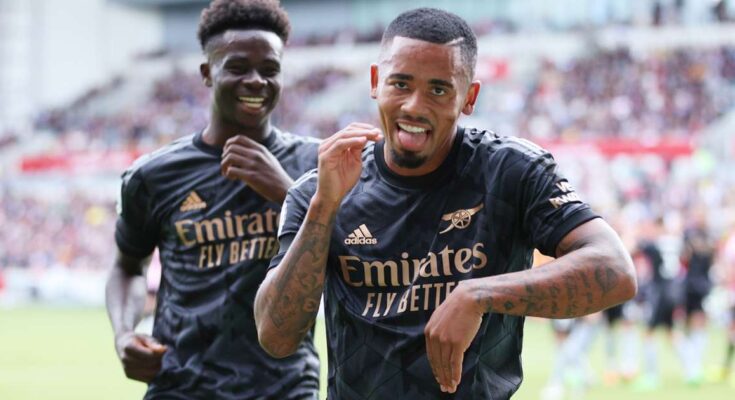 After wheeling away in dancing in celebration for Arsenal, Gabriel Jesus revealed his moves were for Brazil team-mate Vinicius Junior.

Gabriel Jesus dedicated his celebration for Arsenal against Brentford to Vinicius Junior after the Real Madrid winger was subject to a comment with apparent racist undertones from a Spanish football agent.

Pedro Bravo has drawn much criticism after comments on El Chiringuito with apparent racist connotations, telling Vinicius to stop dancing “to respect your mates and stop playing the monkey”.

Jesus paid his own tribute to Vinicius after scoring in the 3-0 win over Brentford on Sunday, running to the corner flag and opting to dance instead of his usual ‘phone rings’ celebration.

The Brazil forward confirmed to Sky Sports after victory at the Brentford Community Stadium that his celebration was for his international team-mate.

“The celebration was for my guy Vinicius Junior, it needs to stop and it was for him,” he said.

Jesus has now been involved in seven Premier League goals this season (4G, 3A), with only Manchester City’s Erling Haaland (12) boasting more in the competition.

Indeed, no Arsenal player has ever had more combined goals and assists through their first seven Premier League appearances (level with Pierre-Emerick Aubameyang), and Jesus hailed the performance.

“From the start we showed what we want to do in the game, create chances and score. That is what I believe we did,” he added.

“[Granit Xhaka] found me for the goal and I am so happy to play with him, he is an intelligent and quality player.”

Arsenal returned to the Premier League summit with the triumph over their London rivals, one point clear of Manchester City and Tottenham, and Xhaka believes his side are a different team this season.

“We have a different mentality this season. We kept going and are training like we play and have class with the players that can make a difference,” Xhaka said.

“You have the class in the front and they make the difference. I am more than happy we are in a good way but we have a long way to go.”