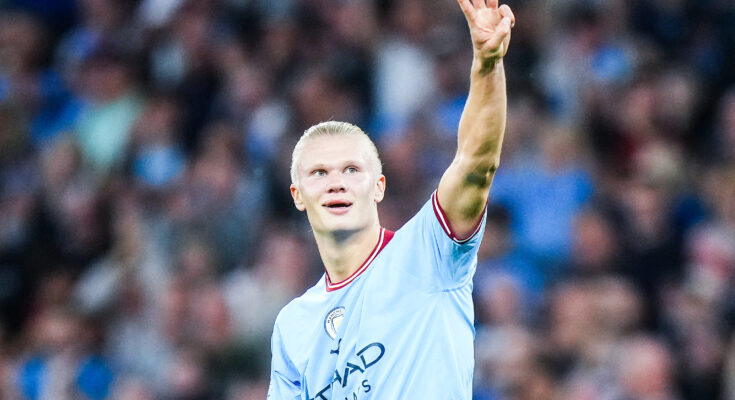 Erling Haaland described his start to life in the Premier League as “amazing” after hitting his second consecutive hat-trick to make history in Manchester City’s 6-0 demolition of Nottingham Forest.

Haaland – who scored a winning treble against Crystal Palace on Saturday – needed just 38 minutes to complete a perfect hat-trick as Forest wilted on Wednesday, taking him to nine goals in his first five Premier League games.

The result marks a new competition record, bettering the eight-goal hauls achieved by Sergio Aguero and Micky Quinn at the start of their Premier League careers.

Meanwhile, City have scored 19 goals in their first five games, the highest total in league history. The last team to break the 19-goal mark after five games at the start of a Premier League season was Manchester United in 2011-12 (21 goals).

Haaland has scored at a remarkable rate of a goal every 43 minutes since arriving at the Etihad Stadium and is the first player to score hat-tricks in back-to-back Premier League games since Harry Kane in December 2017.

Speaking to BT Sport after the dominant win, Haaland said: “It’s amazing. Nothing to add. It’s been good so far, I’m not complaining!

“I try to listen to Pep as much as possible and play with the boys because they are amazing footballers and I wouldn’t be able to score goals without them.

“So it’s about finding chemistry, playing together and listening to Pep [Guardiola].

“It’s fantastic, that’s why I came here. You can see we’re playing so well, we’re going to find each other and get even better, so it’s going to be nice.”

Alvarez is the seventh Argentine to score on his first Premier League start and the first to do so more than once, and is targeting more than a part-time role in Guardiola’s side.

Speaking to the BBC, Alvarez said he believed he could form an effective partnership with Haaland, saying: “Obviously I’m very happy for the team performance and for my two goals and for getting such a reception from all the fans.

“I think it’s not me, it’s not Erling, we can play together in the starting eleven. We fit together, which is good for the team.

“Some things are similar from Argentina, like the pressure on the ball, but the Premier League is faster, I have to adapt to that. My teammates help me and I’m very grateful for that.”