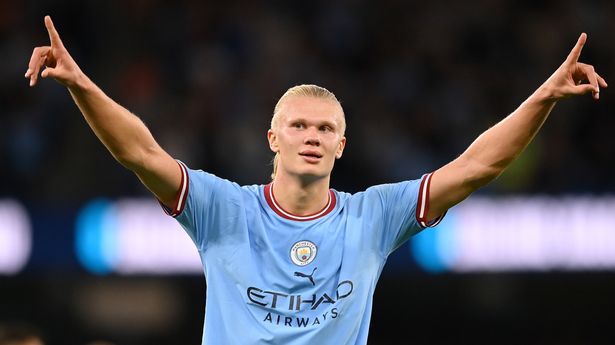 Pep Guardiola is happy to lean on the knowledge of Manchester City’s former Borussia Dortmund players ahead of Wednesday’s UEFA Champions League meeting with the Bundesliga club.

Dortmund head to the Etihad Stadium for their fifth UEFA Champions League meeting with City.

The clubs previously met in the 2012–13 group stage and in the quarter-finals in the 2020–21 campaign. City have won three of those matches, with the other ending in a draw.

Ilkay Gundogan, Sergio Gomez, Erling Haaland and Manuel Akanji have all spent chunks of their careers at Dortmund, with the latter two signing for City from the German side earlier this year.

Akanji made his City debut in last week’s 4-0 thrashing of Sevilla, a game in which Haaland scored twice to take his season to 12 goals from seven games in all competitions.

Asked at the press conference if Haaland was excited to face his former side, Guardiola said: “We talked in general. Not [a] specific [interview]. Of course we talked about some of their players, what they think , but in the end it’s the quality of tomorrow’s players that makes the difference.”

However, Guardiola is more than willing to heed the advice of his four former Dortmund players.

“Yes, they are intelligent, the players know about football,” he said. “Some particular players have doubts… they know them better than I do. They’ve been with them for two, three years, they know a lot more than I do. I could watch a thousand videos.

“Their systems, formations are less important than the fact that the manager is, how they thought they played against us two years ago – they know that, they know that better than I do.”

It has been a remarkable start to life in England for Haaland, who is the first City player to score on both his Premier League and Champions League debuts for the club.

Haaland has scored 25 goals in 20 Champions League games, the most of any player in his first 20 games in the competition. With Dortmund, he netted 15 in 13 games and could become only the second player after Ciro Immobile to score for and against the German side at the tournament.

However, Guardiola believes it is too early to judge whether the striker can be the difference in City ending their Champions League duck.

“I’m not in a position to know,” he said. “The team and him are playing well [so far], but right now I don’t know.

“At 22, 23, he can definitely be better. It’s the connection with his teammates, it’s a matter of time, he’ll become a better player.”