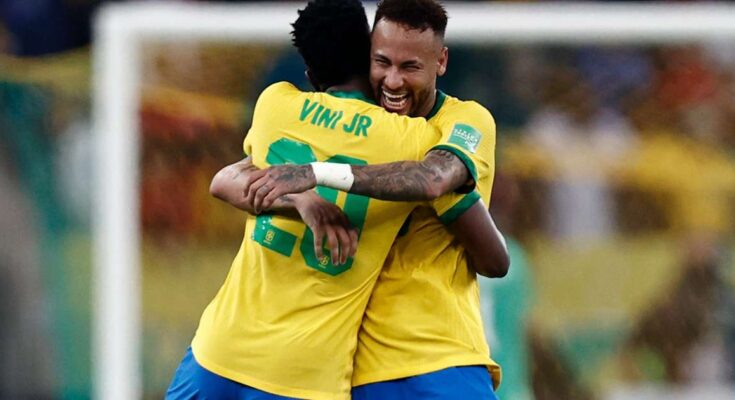 Pele has joined Neymar in offering his support to Vinicius Junior, who was the subject of a comment with apparent racist undertones from a Spanish football agent.

Pedro Bravo, the main agent in Spain, appeared on El Chiringuito this week and said that Real Madrid striker Vinicius had to stop dancing while celebrating a goal.

The comment led to outrage from Vinicius’ international team-mate Bruno Guimaraes, with the Newcastle United midfielder calling for Bravo to be “jailed”.

Guimaraes tweeted on Friday: “This MORON needs to get out of there already under arrest! There is no excuse! When this guy says it on live TV, imagine what he doesn’t say when he’s not. Unfathomable unless this guy is in jail.”

Neymar then tagged Vinicius on his Instagram story alongside a photo from the Madrid star’s celebration with the caption that read: “Dribbling, dancing and being you! Happy the way you are. Go ahead my boy, next goal we’ll be dancing! ”

Vinicius responded with a photo of himself dancing alongside Neymar and Guimaraes while playing for Brazil.

Pele then joined Neymar in offering his support, with the legendary forward writing on Instagram: “Football is joy. It’s a dance. It’s more than that. It’s a real party.

“Although racism unfortunately still exists, we will not let it stop us from smiling again. And we will continue to fight racism every day in this way: fighting for our right to be happy and respected.”