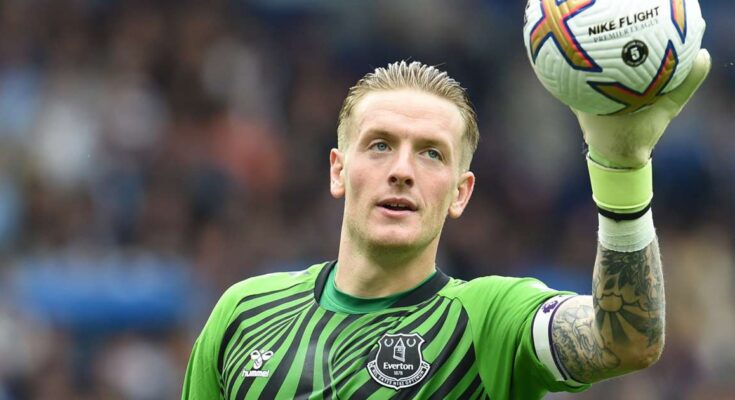 Jordan Pickford frustrated Liverpool with a stunning goalkeeping performance in an absorbing 0-0 draw with Everton at Goodison Park.

The England number one made a string of excellent saves, while opposite number Alisson also had to be sharp to prevent a home win in a Merseyside derby that could have been flooded with goals.

Both sides rattled the frame of the goal in the first half, Everton through Tom Davies before Liverpool’s Darwin Nunez and Luis Diaz followed suit, while Mohamed Salah was also denied by the woodwork late on.

Chances flowed in an open game, and Everton thought they had snatched the lead midway through the second half when former Liverpool academy player Conor Coady touched in Neal Maupay’s cross, only to be denied when a VAR checked showed he was inches offside.

Liverpool goalkeeper Alisson made a smart early save to gather Anthony Gordon’s fizzing strike after an Everton corner was only half-cleared, and the hosts came within a whisker of the opener when Davies smacked a shot from 12 yards against the left post.

Jurgen Klopp’s visitors showed their threat before the break, though, when Nunez’s excellent strike was tipped against the crossbar by Pickford, and from the rebound Diaz crashed a howitzer of a drive against the right post.

Amid a determined effort from the Reds to find a breakthrough, Pickford saved from Firmino twice in quick succession, firstly tipping a shot wide before parrying the Brazilian’s header from a corner.

The goalkeeper thwarted Fabinho from close range too, before Everton debutant Maupay wasted the biggest chance of the game after a rapid counter-attack, shooting straight at Alisson who made himself big and pulled off the save.

Coady thought he was the hero, but closer examination of his 69th-minute tap-in left Everton deflated, their winless run at home in the league against their city rivals extending to 12 games.

It could have been worse, as Salah, quiet for so much of the game, almost won it in stoppage time, his shot cracking off the foot of the right post.