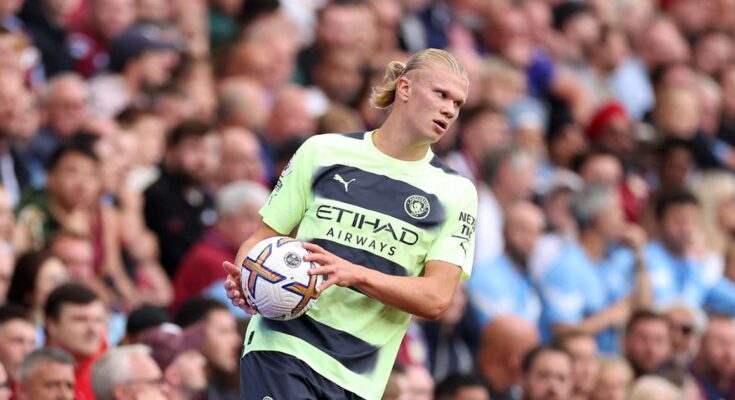 Erling Haaland reminds Gary Neville of a villain from a James Bond film, with the former Manchester United defender adding that the striker could go on to be “the best player in the world”.

Haaland has scored 10 goals in his first six Premier League appearances for Manchester City in an electric start to life in the Premier League.

Having lit up the Bundesliga during his time at Borussia Dortmund, Haaland now looks set to double down on his growing reputation as one of the game’s deadliest goalscorers.

After hat-tricks against Crystal Palace and Nottingham Forest, the 22-year-old got on the scoresheet again on Saturday as City drew 1-1 at Aston Villa.

Ex-Manchester United defender Neville said on his Sky Sports podcast that he believes Haaland will take City back to the top of the Premier League, comparing the striker to the villains who filled the Bond films as unstoppable adversaries.

“Things are happening this season that are not smooth, but I expect Manchester City to win this league and they could win it comfortably,” he said.

“Erling Haaland – it just seems a bit unfair. I remember when I was younger watching James Bond movies and there was a Jaws character who was like 7ft 2in. He would just pick people up and throw them on the floor.”

“It’s a bit like that when you watch Haaland against strong centre-backs. You think, ‘Wow, he’s just unplayable – how do you even deal with him in the box?’

“This player – you fully expect him to go on and win the Ballon d’Or and be the best player in the world. That’s exciting – that hasn’t happened in the Premier League for a long time.”

Haaland is set to make his Champions League bow for City on Tuesday when they travel to Sevilla for the first leg of their group stage.