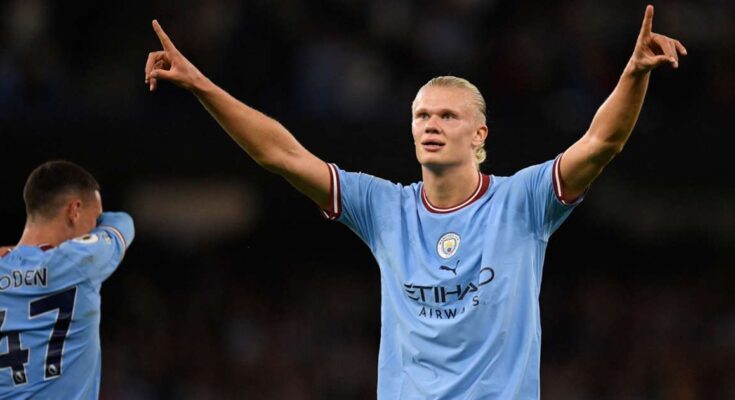 Erling Haaland could become the greatest player in Premier League history after making an astonishing start to his Manchester City career, according to Jamie Carragher.

Haaland has been in electrifying form for champions Pep Guardiola since his arrival from Borussia Dortmund, scoring nine goals in his first five league games for City.

The haul is the best by any player in his first five Premier League games and the tall Norwegian became the first player since Harry Kane in December 2017 to score a hat-trick against Nottingham Forest on Wednesday.

The City striker has averaged a goal every 43 minutes of league action this season and Carragher believes Premier League fans are witnessing something special.

“I would probably say Man City had a really good window with the players they brought in,” he told Sky Sports.

“They’ve lost a lot of attacking players but look at Haaland… [Julian] Alvarez has already started, he looks like he has real quality.

“Haaland is one that jumps out at you, he looks absolutely amazing.

“We know we have a great player in the league but I think we have something really, really, special where when he finishes his time at Man City or in the Premier League we will talk about him. alongside Thierry Henry.

“I think this lad could end up being the best player we’ve seen in the Premier League, I know it for a fact. He’s special and he’s got off to a great start.”

Should Haaland find the net when City travel to Aston Villa on Saturday, he would become just the fifth player to score in his first three away Premier League games (after Peter Beardsley, Jurgen Klinsmann, Francesco Baiano and Alen Boksic).

Given the 22-year-old’s incredible form, he will also likely be looking to become the first player in the history of the competition to score a hat-trick in three consecutive appearances.

Pierre-Emerick Aubameyang is another former Dortmund striker to move to the Premier League, reuniting with former BVB boss Thomas Tuchel in a Barcelona-to-Chelsea swap.

While the 33-year-old’s spell at Arsenal came to an acrimonious end in January, Carragher believes his arrival is a welcome boost for Chelsea.

“He’s a quality player, there’s no doubt about that and I think he’s a good signing,” he said.

“People can question Arsenal’s role, the fact that they let him go for free and Chelsea are paying money for him [less than] 12 months later.

“I think it’s a good signing for Chelsea but I also think it was the right decision for Mikel Arteta and Arsenal, look where they are right now.

“Aubameyang, we know what he brings, the goals and the quality. Thomas Tuchel knows him, he worked with him at Borussia Dortmund and as a neutral player I’m glad he’s in the Premier League. He’s a great player.”