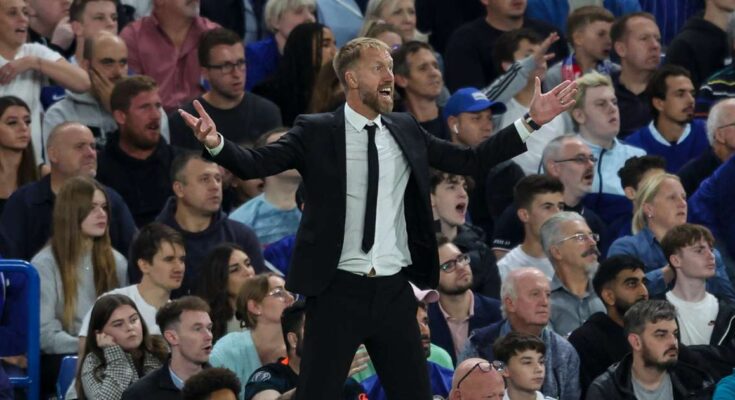 Chelsea remain winless in this season’s UEFA Champions League after being held to a 1-1 draw at home to Salzburg in Graham Potter’s first game as head coach.

The Blues suffered a shock 1-0 defeat at Dinamo Zagreb in their Group E opener last week in what turned out to be Thomas Tuchel’s last game.

Potter’s tenure looked like a winning start against Salzburg when Raheem Sterling opened the scoring with Chelsea’s first shot on target early in the second half.

But Salzburg, who also held Milan last week and are now unbeaten in nine games in all competitions, hit back through Noah Okafor in the 75th minute to leave Potter and his players frustrated.

Chelsea dominated the opening 45 minutes of the first meeting but Pierre-Emerick Aubameyang and Mason Mount were wayward from the best chances.

The home side got a scare shortly before half-time when Benjamin Sesko forced Kepa Arrizabalaga into a low save from Salzburg’s only first-half effort.

Potter opted for the break against the changes and was rewarded in the 48th minute when Mount’s pass went through to Sterling who curled a wonderful shot into the bottom right corner.

However, Chelsea could not build on that breakthrough goal and Okafor slotted past Kepa to equalize after Thiago Silva failed to clear the danger from Junior Adamu’s cross.

GK: Kepa Arrizabalaga – 6/10 – Provided an option to play from the back. Made a decent sprawling save but was largely untroubled.

CB: Cesar Azpilicueta – 5/10 – Looked every bit his 33 years of age at times. Beaten by the run of Okafor for the equaliser.

CB: Thiago Silva – 6/10 – Put in a series of excellent tackles and interceptions, but was too weak in his challenge leading to Salzburg’s equaliser.

CB: Marc Cucurella – 6/10 – Flittered between center-back and left-back. Saw a lot of the ball but wasn’t as creative he could be.

RM: Reece James – 5/10 – Pushed up high as a wing-back at times in Potter’s fluid system. Couldn’t quite bring all the facets of his expansive game together.

CM: Mason Mount – 7/10 – Dropped very deep to track back, collect the ball and build attacks. Provided the assist for the opening goal.

CM: Jorginho – 5/10 – Pressed into a few errors early on and struggled to keep up with the high tempo of the game but eventually settled into the rhythm.

CM: Mateo Kovacic – 5/10 – Showed his obvious quality in flashes but not throughout the entire match.

LM: Raheem Sterling – 8/10 – Played as a wing-back at times (the Leandro Trossard role, if you will), but that meant he had lots of room to run into. Took his goal excellently.

AM: Kai Havertz – 6/10 – Pressed and created plenty of havoc in the first half. Was a bit more toothless in the second and was duly hooked.

CF: Pierre-Emerick Aubameyang – 5/10 – Got himself into good areas and led the line fairly well, but couldn’t find the net on his home debut.

Manager: Graham Potter – 6/10 – Chelsea looked like a team who had been coached by a manager for much longer than six days, testament to Potter and his backroom staff. However, their issue in creating clear cut chances and converting them remain.

Player of the Match – Raheem Sterling