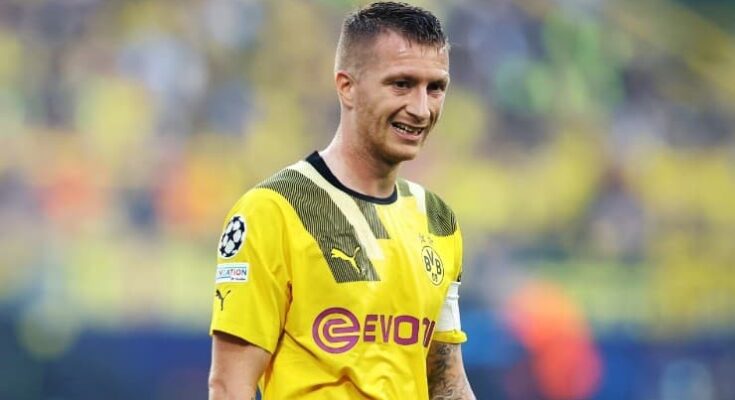 After defeating Schalke, Borussia Dortmund ascended to the top of the Bundesliga standings. Sadly, their captain, Marco Reus, had to leave the field early. Here, find out what happened.

After a difficult first half, rising star Youssoufa Moukoko scored the winner for the home side when he headed in Marius Wolf’s cross in the closing minutes of the second half. The teenager scored the winning goal aged just 17, making him the youngest player in the competition’s history to do so.

However, Dortmund captain Marco Reus was injured and had to be carried off the pitch on a stretcher, casting a shadow over the final score. A clumsy tackle by Schalke’s Florian Flick left Reus injuring his right ankle and breaking down in tears as American Gio Reyna replaced him.

Why did Marco Reus leave the pitch vs Schalke?

Dortmund’s captain, who was eventually carried off on a stretcher, required medical attention on the pitch. No one, not even the scholars, wanted to relive that moment. Reus and Dortmund are keeping their fingers crossed that he doesn’t seriously damage his ankle ligaments.

Germany coach Hansi Flick had high hopes for the midfielder and named him in the squad for the upcoming games against Hungary and England. Meanwhile, the World Cup is just around the corner as the action kicks off in Qatar on November 20. After meeting Japan in Doha three days later, Germany face Spain in Al Khor for the fourth and final time in Group E on 1 December.

The 33-year-old has had an injury-plagued career that has always come at the worst possible times. He was forced to miss the tournament after injuring his ankle in a warm-up match before Germany’s 2014 World Cup victory, and in 2016 a groin injury forced him to miss the European Championship.

In 2018, he was a member of Germany’s 2018 FIFA World Cup defensive squad, although he spent the following year at the European Championships to rest and recover after a season in Dortmund. No information was immediately available from Dortmund on the severity of Reus’ injury. Before halftime, the athlete was still being treated in the dressing room before being sent to the hospital.