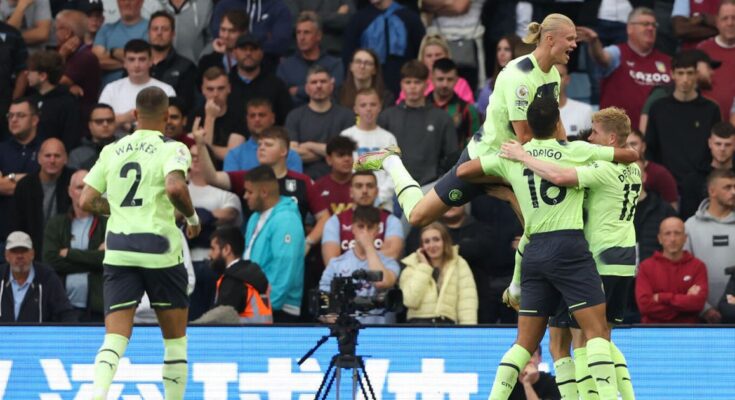 Manchester City dropped points for the second time this season in the Premier League as Leon Bailey cancelled out Erling Haaland’s opener to earn a 1-1 draw for Aston Villa.

Pep Guardiola’s side failed to get a shot on target in the first half, yet they took the lead five minutes after the break when Haaland nudged home his 10th goal of the season from close range.

City were made to pay for a string of missed chances when Bailey struck with 16 minutes remaining to anger Villa Park, delighting the under-pressure home boss Steven Gerrard.

The second-placed champions moved a point behind leaders Arsenal, who face a test against an improving Manchester United on Sunday, while Villa climbed to 17th.

City started in typically dominant mood with Kyle Walker and Kevin De Bruyne getting the better of them in the opening 10 minutes.

However, Villa withstood that initial pressure and almost took the lead in the 38th minute when Ollie Watkins’ effort was narrowly saved by John Stones.

City went ahead in the 50th minute with their first shot on target, Haaland sneaking in at the back post to turn in De Bruyne’s cross.

The former Borussia Dortmund forward almost had a second shortly after the hour, but his instinctive effort was blocked by the legs of Emiliano Martinez.

De Bruyne then clipped the top of the bar from a 20-yard free-kick before Martinez again denied Haaland.

Villa grabbed a point in a rare foray forward as Bailey tapped home from 15 yards after being picked out by Jacob Ramsey.