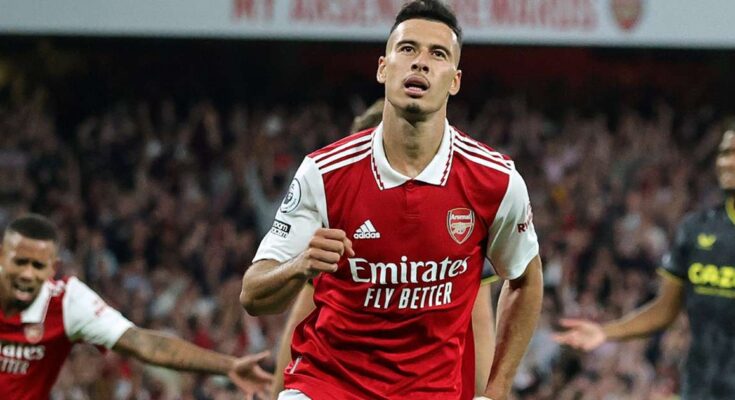 Gabriel Martinelli got the winner as Arsenal beat Aston Villa 2-1 to maintain their perfect start to the Premier League season.

Douglas Luiz’s goal from a corner – the Brazil international’s second such strike this term – canceled out compatriot Gabriel Jesus’ first-half opener at the Emirates Stadium.

Emiliano Martinez was at fault for Jesus’ goal and, despite a number of fine saves, was again at fault for Martinelli’s strike three minutes after Villa’s equaliser.

Martinez, playing against his former club, slapped home Martinelli’s volley as Arsenal made it five in a row to open a top-flight campaign for only the fourth time in the club’s history.

Martinez was on hand to deny Jesus inside ten minutes before Martin Odegaard’s effort was blocked by Tyrone Mings.

Arsenal’s deserved opener came in the 30th minute – Granit Xhaka’s cross was deflected away by Ezri Konsa and Martinez could only tip the ball into the path of Jesus, who smashed home.

Villa came out with more intent in the second half and found an equalizer in remarkable fashion, substitute Douglas Luiz scoring directly from a corner with only his second touch as Aaron Ramsdale’s appeal for a foul went nil.

But Arsenal’s response was swift, Bukayo Saka’s right-wing cross finding Martinelli whose volley had too much power for the scrambling Martinez to hand Steven Gerrard’s side a fourth defeat in five league games, with Villa fortunate Arsenal missed a couple of late chances to strengthen its leadership.