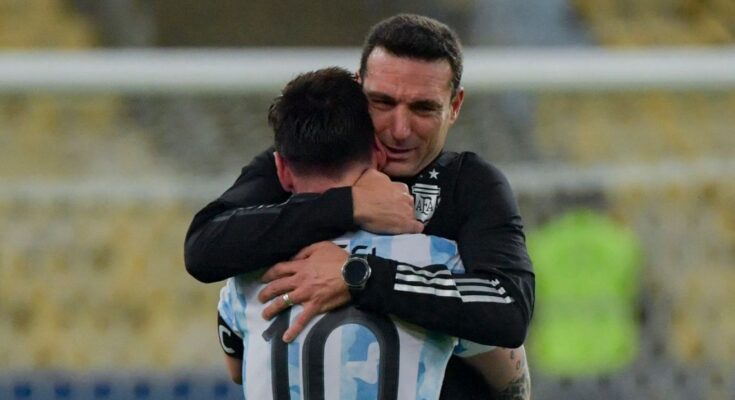 When Argentina take on Honduras and Jamaica in upcoming friendlies, there will be few changes to the Albiceleste squad that has not lost a match in more than two years. And why should there be? Since a 2019 Copa America semifinal loss to Brazil, Lionel Scaloni’s side has gone undefeated in 33 games, claimed the 2021 Copa for their first senior title since 1993, qualified for the 2022 World Cup in style, and thrashed European champions Italy in June in a showpiece match at Wembley.

That would be remarkable under any circumstances. But it’s almost beyond the realm of the extraordinary if we remember two things. Firstly, that Argentina was an absolute wreck at the 2018 World Cup in Russia. Second, rookie coach Scaloni was appointed as a stopgap manager because he met the only criteria at the time – he wasn’t a big financial risk. And now his team in Argentina is referred to as “Scaloneta” – the house he built.

Argentina previously made a long-term bet with the high-profile, dynamic Jorge Sampaoli. It was a disaster that should have been foreseen. Argentina simply didn’t have the quick defenders and ball-playing goalkeepers needed for Sampaoli’s game. An aging team limped out of Russia, where they flirted with a first-round exit. With a huge reward, Sampaoli was fired. Money was in short supply, so Scaloni came along. He didn’t speak like a janitor.

“[World Cup finalists] France and Croatia robbed the ball and were in a position to shoot in 3 or 4 seconds,” was his post-Russia conclusion. “That’s the way football is going, it’s the football I like and the moment has come to introduce this in Argentina. We’re going to be more direct and vertical.”

There was an obvious problem with this approach. It’s not a model of play that suits Lionel Messi. It started badly. Scaloni’s first competitive match was their 2019 Copa America opener against Colombia. Argentina were stretched thin and easily found their way to a 2-0 defeat. The rest of the contest was Argentina’s attempts to switch to a more feasible idea of ​​the game. They played well in that semi-final loss to Brazil. But with Messi and two strikers – Lautaro Martinez and Sergio Aguero – they were very heavy and hit the counter-attack too easily.

However, Messi was clearly on board. Playing for the national team for the first time in his career seemed like the most important thing in his career. He seemed a distant figure to his Argentine team-mates, happy in his own little world. He was now a louder, more encouraging figure, integrated into the group like never before. And as World Cup qualifiers approached, Argentina were not vertical and straight. They were building a possession-based team where the midfield trio of Leandro Paredes, Rodrigo De Paul, and Giovani Lo Celso could dictate the rhythm of the game and bring Messi into play close to the opposition’s goal. It’s the most coherent collective thought Argentina have had throughout Messi’s long international days. On song, once the game has opened up – such as the second half against Italy at Wembley in June – they are a joy to watch.

Defense has long been a key problem area. It certainly was four years ago in Russia and it will certainly come under pressure at times in Qatar. But there has been a new confidence since June last year when goalkeeper Emiliano Martinez and center-back Cristian Romero joined the side. The statistics are certainly impressive. Argentina have conceded only two goals in their last 12 matches.

It would be a surprise if Honduras worsened those numbers in Miami on September 23 and Jamaica four days later in New Jersey. But that’s hardly the point. These are just warm-up games to get the group together and make any adjustments later – it could be interesting to see if Brighton’s Alexis Mac Allister gets another chance in the deeper midfield role he played last game, for example. , a friendly with Estonia in June.

But even a shock defeat in these FIFA terms will not derail the Scaloni project and is highly unlikely to affect confidence as Argentina prepare for the World Cup. Scaloni knows his team have some time to lose – citing Italy as an example, where a long unbeaten run didn’t prove enough to get them to Qatar. Given the choice between a long unbeaten run and a World Cup victory on December 18, there is no doubt which one Scaloni would choose. Maybe he can have both.