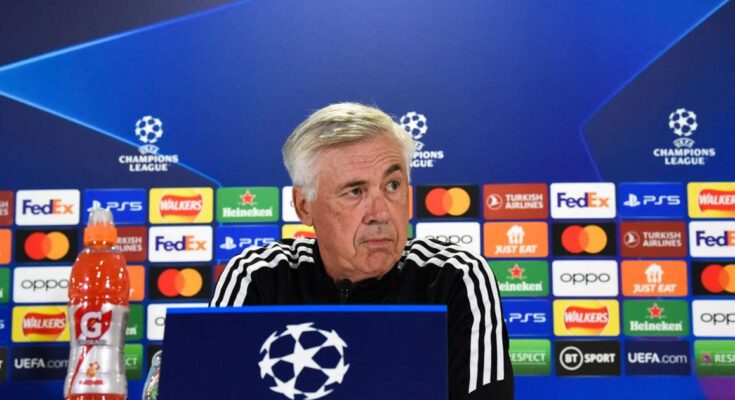 Carlo Ancelotti believes the biggest unknown surrounding Real Madrid’s potential defence of the Champions League is the prospective physical condition of his players when they return from the World Cup.

Madrid begin their quest for a 15th European Cup on Tuesday when they visit Scottish champions Celtic.

The group stage is condensed this season due to the FIFA World Cup and moved from its usual Northern Hemisphere summer slot to November due to the extreme heat in Qatar.

Teams involved in the group stage will play six matches over two months, with the battle for a place in the round of 16 concluding on 2 November.

In addition to domestic commitments, this means a packed fixture list. Still, Ancelotti is less concerned with the implications of the schedule than the potential toll on his squad when they play in the World Cup midway through the season.

“Until the World Cup, I think we won’t have any problems,” Ancelotti said of the unusually busy fixture list.

“The players are ready and motivated. The question is how the World Cup players will come back. You can’t tell.”

Madrid are not considered favorites for the Champions League despite their remarkable performance last season. Los Blancos staged thrilling comebacks against Paris Saint-Germain, Chelsea and Manchester City before beating Liverpool 1-0 in the final.

City are the bookies’ favorites ahead of PSG, Liverpool and Bayern Munich. However, Ancelotti is happy that his team is not among the top four in this sense.

“I’m not surprised. I see it as a good sign,” he added. “I think last year we had even less probability in the stats. So we’ve improved.

“What happened last year will happen. We will compete until the end and hopefully compete in the finals.”

However, Ancelotti’s side are overwhelming favorites to win Group F, which also includes RB Leipzig and Shakhtar Donetsk, as well as Celtic.

But Ancelotti pointed to Madrid’s shock home defeat to Sheriff Tiraspol in the group stage last season when asked about their seemingly easy draw.

“It’s not an easy group because we know the teams very well,” Ancelotti said. “Celtic are doing very well, we have to respect them, like Leipzig and Shakhtar.

“There are surprises in the group stage, especially in the first half. We have quite vivid memories of last season with Sherriff at home. We respect the group and I think it will be a balanced group.”