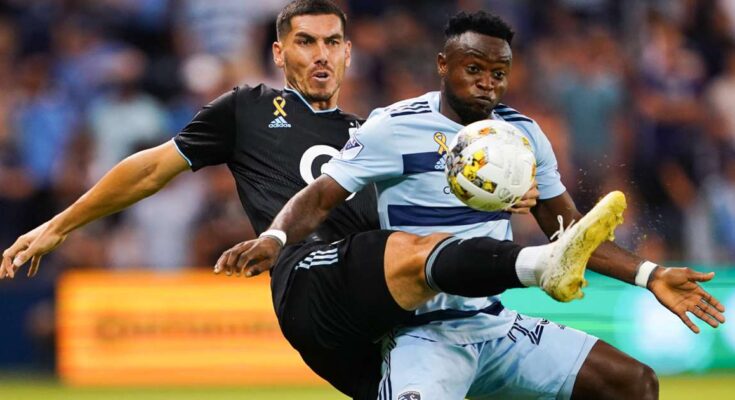 Sporting Kansas City treated their home fans to an impressive 4-1 upset win against Minnesota United on Saturday, with William Agada netting a brace on his birthday.

Against the Western Conference’s fourth-ranked Minnesota, No. 12 Sporting closed out the first half in style, scoring three goals in a span of 15 minutes.

The first was courtesy of a friendly rebound, when a hard, low cross in the 31st minute was deflected by the Minnesota keeper right off the legs of center back Michael Boxall and into the back of the net for an own goal.

Johnny Russell then hit the post in the 41st minute but was able to track down the rebound and beat Erik Thommy into the box, who evaded the challenge and fired home Sporting’s second goal.

Ben Sweat capped off a brilliant first half, whipping in a dangerous through ball in the 45th minute for Agada to meet a header to send his side into the shed leading 3-0.

Mender Garcia Torres managed to catch Minnesota off guard in the 57th minute, but Agada put the game to bed with his second goal in the 81st minute when he tapped in a smart low cross from Daniel Salloi.

Earlier in the day, in a battle between two of the Eastern Conference’s top four teams, New York City won its local Hudson River Derby over the New York Red Bulls 2-0 at Yankee Stadium.

City doubled their lead in the 23rd minute and it was again the result of a well-worked corner, this time with Rodriguez on the receiving end of the ball, who controlled it and brought it down before sliding it past the keeper.

It was a game with no chances in open play as City finished with just 0.60 expected goal while the Red Bulls had 0.71.

In a game with similarly few scoring opportunities, the top-placed Philadelphia Union held on for a point in their 0-0 draw away to non-playoff Atlanta United.

Philadelphia only managed to score 0.16 Expected Goals, while Atlanta United controlled 60 percent of possession and won the shots 16-5 while finishing with 1.30 Expected Goals.

Orlando City produced a superb finish and defied their expected goals of 0.95 to defeat Toronto FC 4-0, scoring two goals in each half.

The East’s other side, CF Montreal, were good enough to leave the game against the New England Revolution with a 1-0 win, with Alistair Johnson finding the winner on 72 minutes.

Charlotte conceded goals in the third and 30th minutes to fall behind early against the Chicago Fire, but they rallied to score in the 68th and 76th minutes to equalize before stealing the points with a 96th-minute winner.

League top scorer Hany Mukhtar scored his 23rd goal of the season to help Nashville to a 1-1 draw against Austin as Cincinnati solidified its playoff position with a 2-1 win at Real Salt Lake.

In the late window, the Vancouver Whitecaps scored two quick first-half strikes in a 2-1 home win against the Seattle Sounders, while Chicharito was one of four goal scorers for the Los Angeles Galaxy in a 4-1 win over the Colorado Rapids. and FC Dallas secured a hard-fought 1-1 draw with 10 men against the San Jose Earthquakes.