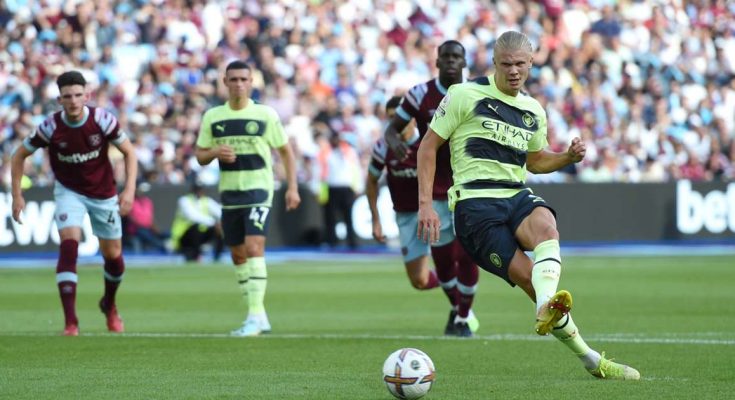 A first-half penalty from Haaland was followed by a typically clinical finish as the big money signed after the break as the champions took three points from their opening game.

With Haaland seen as the striker Pep Guardiola has been missing since the departure of Sergio Aguero, it was fitting that the new signing became only the second City player to record a brace on his Premier League bow, with the former Argentina international being the second in August 2011.

It took a while for City to get going and they thought they had taken the lead when a neat move down the left led to Haaland playing in for Ilkay Gundogan to take on Kevin De Bruyne to sweep home, but the offside flag went away. up.

Moyes’ injury woes mounted as Lukasz Fabianski was forced off after colliding with Haaland and Alphonse Areola replaced him.

One of Areola’s first contributions was to humble Haaland when he went through on goal to concede a penalty in the 36th minute, which the Norwegian striker calmly whistled away to send Areola the wrong way.

Declan Rice skied over a decent chance after a Gundogan error early in the second half and some uncharacteristically misplaced City passes crept in as the Hammers looked for an equalizer and turned to their new striker Gianluca Scamacca, who came on just before the hour mark.

However, Haaland struck again in the 65th minute as a City counter-attack saw De Bruyne tuck his new team-mate in and the former Borussia Dortmund player coolly placed his shot past Areola to seal the points.