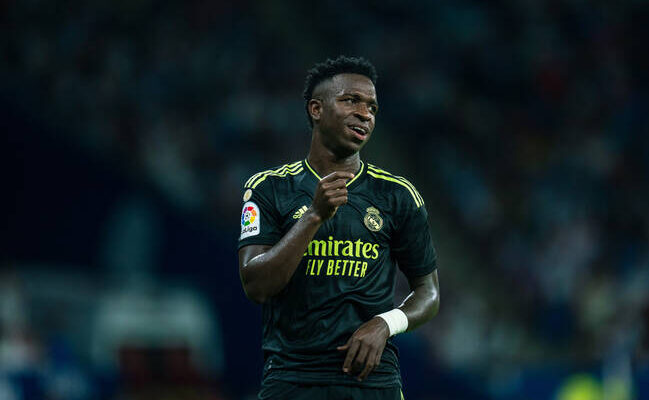 Vinicius scored his second goal of the season against Espanyol, his second in a row after opening his 2022-23 season account against Celta Vigo. The Brazilian continues to pick up from where he left off last season following his ‘explosion.’

Vinicius‘ 22 goals in the 2021/22 season marked a turning point in his career. The Brazilian has shed the curse of shyness in front of goal after three seasons of relatively poor returns (3 goals in 18/19, 5 in 19/20 and 6 in 20/21). Once that weight was lifted off his shoulders, he was unstoppable and broke the 20-goal mark.

The cherry on top of a great season came when he scored the goal that won Real Madrid their 14th European crown in Paris.

At the age of 21, for example, he equaled Gareth Bale’s best goalscoring record as a Real Madrid player (22 goals in the 13/14 season) and became Los Blancos’ second top scorer, behind only Karim Benzema. Vinicius’ offensive performance last season cannot be underestimated: 22 goals and 13 assists.

After last season’s heroics, Vinicius now wants more and is upping the ante. The player is confident that he can break the 30-goal mark this season. Big words, but within reach of a player whose progress seems to have no limits. With his confidence sky-high and his consolidation as a rookie, the challenge is not far-fetched. Vinicius has added to his repertoire and feels capable of achieving records that were unimaginable a year ago.

One of the keys to his ambitious goal is not only the improvement in front of goal and the team’s overall form, but also the Brazilian’s consistency. Last season, Vinicius played 52 of Madrid’s 56 games (93 percent). Vinicius has not been injured since March 2019 and this has allowed him to accumulate playing time.

It is only natural that Madrid wants to extend his contract. Negotiations are ongoing and the only aspect that needs to be resolved is the length of his contract extension. Real Madrid want to extend it until 2028, but as reported by MARCA, the player preferred a slightly shorter duration, namely until 2026 or 2027.