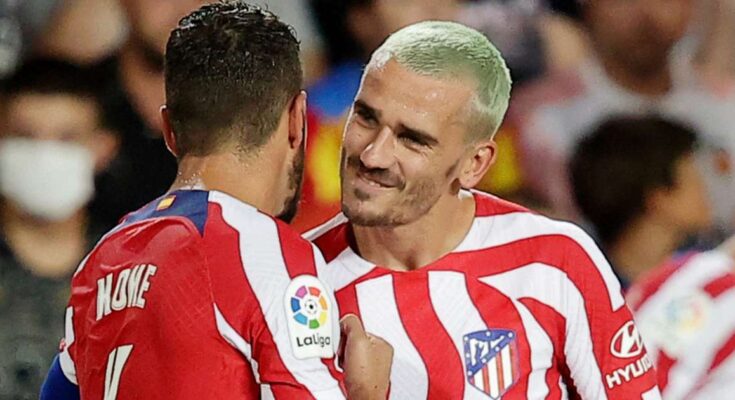 Antoine Griezmann scored the winner just a couple of minutes after coming off the bench as Atletico Madrid beat Valencia 1-0 in a feisty LaLiga clash on Monday.

Griezmann and Thomas Lemar were brought on midway through the second half by Diego Simeone at the Mestalla and combined to secure all three points.

Griezmann took a pass from Lemar before opening the scoring with a deflected shot to make it two wins from three for Atleti.

With new signing Edinson Cavani watching on, Valencia were denied a first-half goal by Yunus Musah after a VAR review as they slumped to defeat.

Alvaro Morata went close with an early close-Getty Images
range effort, but Valencia began to look the more dangerous and looked to have taken the lead in the 25th minute.

Musah beat Jan Oblak with a raucous long-range drive, but referee Guillermo Cuadra Fernandez ruled out the goal after a check on the pitch monitor for Mouctaro Diakhaby’s foul on Joao Felix.

Managers Simeone and Gennaro Gattuso were blocked as tempers flared on the touchline before Joao Felix was denied by Valencia goalkeeper Giorgi Mamardashvili.

Fernandez was again at the center of the action when he sent off Thierry Correia for a professional foul on Morata, but reversed his decision and instead awarded the defender a yellow card.

Mamardashvili used his left foot to keep out Morat’s finish when the striker was clearly sent off at the end of a frantic first half.

Neither side looked particularly threatening in the second half until Lemar and Griezmann struck immediately from the bench, the midfielder winning possession to set up the French striker whose left-footed shot from outside was parried by Carlos Soler.

Mamardashvili pulled off a superb save to deny Yannick Carrasco after Matheus Cunha had a goal ruled out for offside and the impressive Valencia keeper prevented Griezmann from scoring a double.

Cunha hit the crossbar with Mamardashvili’s strong hand, but Griezmann’s goal proved to be enough.