The supercomputer doesn’t just deal with domestic football, oh no – it’s been working hard to crunch the data and tell us who it thinks will win the 2022-23 UEFA Champions League come to the end of the season.

Manchester City are the favourites, with a one-in-five chance of lifting the Champions League trophy (20.7%), while Jurgen Klopp’s Liverpool team are being given a 19.8% probability of winning the competition – just a shade below their Premier League rivals. Adding the precocious talent of Erling Haaland to their squad will only make them an even bigger threat to opponents.

The last time that a UEFA Champions League final took place at the Atatürk Olympic Stadium in Istanbul, Liverpool prevailed in one of the most memorable finals the competitions has ever witnessed – the Reds battling from 3-0 down to AC Milan at half-time, before coming back to seal the UCL title following a penalty shootout. Liverpool fans will be hoping to revisit the stadium 18 years on and replicate their success.

Man City manager Pep Guardiola has previously won two UCL titles as a coach, but he’s not been successful in over a decade, with his two victories coming in 2009 and 2011, both with Barcelona.

Only three managers have won more Champions League/European Cup titles than Guardiola, with Zinedine Zidane and Bob Paisley on three titles, behind only Carlo Ancelotti – the undisputed UCL king.

Ancelotti’s fourth success came just last season, with a 1-0 final victory over Liverpool in Paris. Our supercomputer gives his Real Madrid side the third highest chance of winning the competition in 2022-23, at 13.8%.

If any club are going to win back-to-back UCL titles, it looks likely to be La Liga champions Real Madrid. With three successive wins between 2015-16 and 2017-18, Los Blancos are the only team to win consecutive UEFA Champions League titles in the modern era (since 1992).

Bayern Munich will be without Robert Lewandowski leading their attack for the first time since 2013-14 following his transfer to Barcelona, but our supercomputer thinks the Bundesliga record champions will still be contenders for the title this time around. With a 9.6% chance of success in 2022-23, Bayern are the only other club with more than 5% chance of lifting the trophy in June.

Paris Saint-Germain are the fifth favorite at 4.7%. Despite PSG having a plethora of world stars – Lionel Messi, Neymar and Kylian Mbappé just three of those – they still haven’t been able to lift the UCL trophy – coming closest in 2020, when they lost 1-0 in the final to Bayern Munich.

The Ligue 1 club have played 129 games in the Champions League since it rebranded in 1992 – only Arsenal (177) and Lyon (136) have played more matches in the competition without winning it across the 30 years. 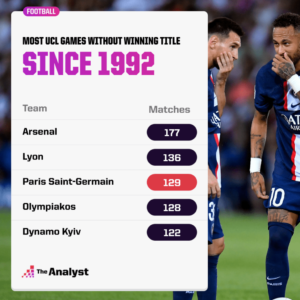 Xavi’s Barcelona side are the outside bet for glory in 2022-23, with the supercomputer rating their chances of being champions of Europe at 4.4% – the sixth highest. None of the last seven finals have included the Spanish giants, with their last success coming in 2014-15 when they beat Juventus in the final.

Spurs reached the final in 2019, losing to 2-0 Liverpool in Madrid. They now have Antonio Conte in charge, with the Italian never winning the UCL despite leading his various teams to five top-flight league titles in England and Italy. Their biggest threat in the group stage look to be Portuguese club Sporting CP, but also have to fight off Marseille and reigning Europa League champions Eintracht Frankfurt for progression to the knockout stages.

Chances of Progressing from the Group Stage

Our supercomputer hasn’t just worked out the likelihood of each side winning the 2022-23 UEFA Champions League, but it’s given us numbers on the chances of each team making it out of the group stage.

Real Madrid (95.0%) and Man City (92.8%) have been given the best chance of making it our of their respective groups and into the last 16. As revealed last week, Group C is the ‘Group of Death with Viktoria Plzeň – who made it through three rounds of qualifying, beating Qarabağ in the playoffs – being given the unenviable task of facing Barcelona, Serie A club Inter Milan and Bayern Munich – of those clubs, the supercomputer gives Bayern (78.5%) and Barca (63.1%) the best chance of escaping the group stage.