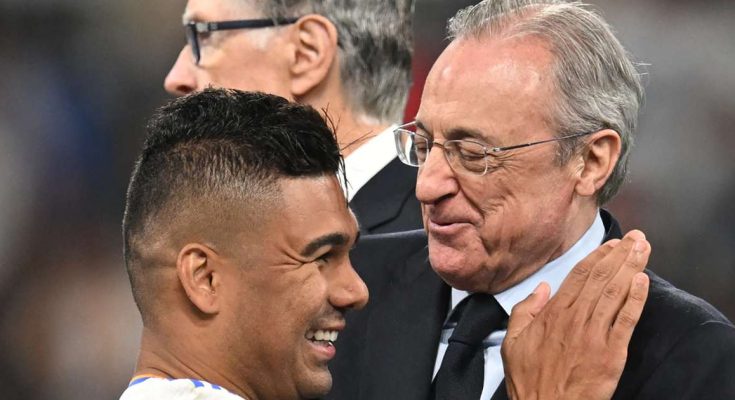 Real Madrid are “very proud of the history” Casemiro has made at Santiago Bernabeu, ahead of his transfer to Manchester United.

That is according to club president Florentino Perez, who spoke glowingly of the 30-year-old at his farewell ceremony on Monday.

Casemiro brings the curtain down on a nine-and-a-half-year stint at Madrid this week, as he nears a move to Manchester United.

A mainstay of the great Madrid side that won a trilogy of Champions League triumphs under Zinedine Zidane, Casemiro leaves as one of their most decorated stars.

Speaking ahead of the player’s own farewell words, Perez delivered a glowing tribute to the outgoing player, stating that he departs as a “legend”.

“We’re very proud of the history you have made at this club,” he stated. “Real Madrid is a very demanding club, but you’ve not only been able to cope with it, but also made it better.

“You’ve been a role model for this club, and everybody admires you for the commitment you have given since the day of your arrival. You have given the best for this club and your attitude and talent has taken you very far.

“For everything that you’ve given this club you have the right to take your own decisions, as far as the future is concerned. You leave after being voted man of the match in the Super Cup final.

“I’m very proud of you, and our fans are too. You are joining a legendary club, Manchester United, to continue to make history. Regardless of where you are going to be in the future, you will always be an example here.

“You have achieved so much. You are leaving the club as a Real Madrid legend. Thank you very much for helping us make history at Real Madrid.”