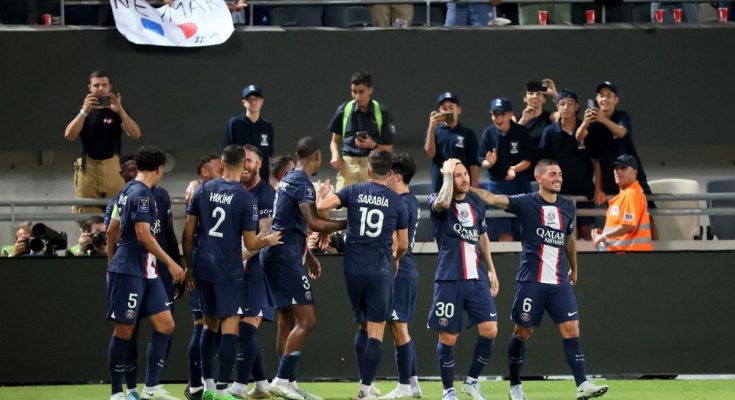 Lionel Messi and Neymar were on target as Paris Saint-Germain thumped Nantes 4-0 to win the Trophee des Champions on Sunday.

Kylian Mbappe did not travel to Israel for the match at the Bloomfield Stadium in Tel Aviv, but his absence was not felt as Christophe Galtier began his reign as PSG boss in style.

Lionel Messi sent the Ligue 1 champions on their way in the 22nd minute with a cool finish before Neymar doubled their advantage on the stroke of half-time with a superb free-kick from 25 yards.

Sergio Ramos made it 3-0 just before the hour mark with an improvised finish before Neymar scored a second late on from the penalty spot after an incident in which Jean-Charles Castelletto was sent off.

Achraf Hakimi and Pablo Sarabia went close for PSG in the opening 10 minutes, while at the other end Ludovic Blas was brilliantly denied by Gianluigi Donnarumma.

PSG went ahead in the 22nd minute when Messi rounded Alban Lafont and headed home after Neymar’s deflected through ball.

Lafont did well to deny Messi shortly before the break, but Galtier’s men went into the break with a two-goal lead thanks to Neymar’s superb free-kick.

Ramos added a third in the 57th minute, the former Real Madrid defender superbly slotting into the net after Lafont had kept out Sarabia’s initial effort.

Neymar scored his second goal in the 82nd minute with a calm penalty after being brought down in the area by Castelletto, who was shown a red card by referee Orel Grinfeeld.