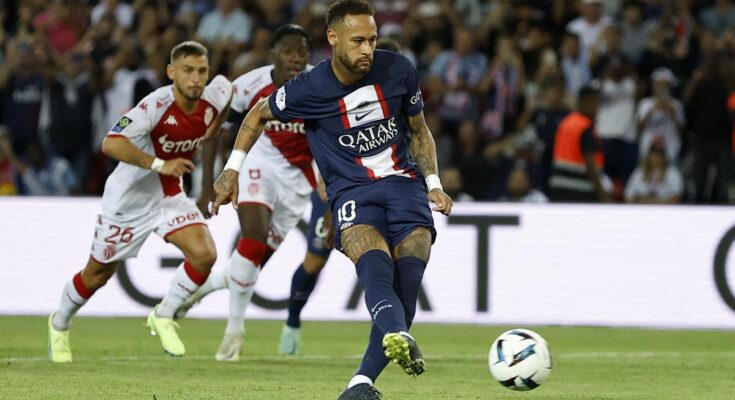 Paris Saint-Germain were held to a frustrating 1-1 draw at home to Monaco as their 100 per cent start to the season came to an end.

PSG started the first half well, but Kevin Volland’s pinpoint finish in front of Gianluigi Donnarumma put the visitors ahead at the break.

Christophe Galtier’s side looked for an equalizer in the second period and found it when VAR awarded a penalty for a foul on Neymar, who stepped up himself to hit the spot-kick.

The home side looked for a winner but couldn’t find it as Monaco held on for a point.

PSG were ultimately frustrated not to take all three points, while Monaco will be happy to escape the capital with a draw.

The Ligue 1 champions dominated early possession but fell behind after 20 minutes when Volland latched on to Aleksandar Golovin’s through ball before slotting it into the bottom right corner.

Monaco almost had a second before half-time, but Donnarumma jumped off his line just in time to head home Caio Henrique’s free-kick.

Wissam Ben Yedder could have made it 2-0 after the break when Donnarumma was caught well outside his own goal, but the France international’s long-range shot went over the bar.

Neymar and Renato Sanches came close to equalizing for the visitors, but Alexandre Nubel’s combination and poor finishing kept Monaco in the lead.

Galtier’s men eventually equalized when VAR awarded a free kick for Guillermo Maripan’s trip on Neymar. The resulting penalty was kicked by the Brazilian representative into the lower left corner.

Monaco came under increasing pressure in the remaining minutes as PSG looked for a winner, Achraf Hakimi was denied by the bar, but Philippe Clement’s side held on for an impressive point.