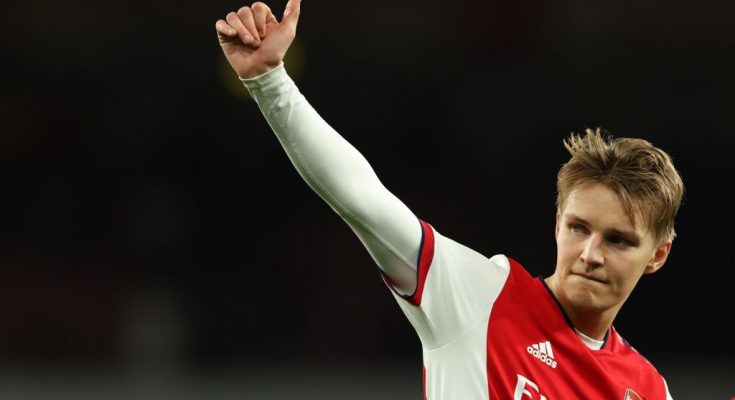 Arsenal midfielder Martin Odegaard has declared he is at the “perfect” club, while detailing the “tough” period that saw former captain Pierre-Emerick Aubameyang depart.

The Norwegian midfielder joined Real Madrid in 2015 as a teenage prodigy aged just 16 and represented Castilla for two years before a string of loan spells at Heerenveen, Vitesse and Real Sociedad.

Despite impressing with these temporary moves, first-class football was hard to come by in the Spanish capital and he joined Arsenal on loan in January 2021.

That move would turn permanent in August of that year, and Odegaard feels he has finally found a home at the Emirates Stadium.

“I feel really at home. I feel like I’ve settled in. I’ve been moving around a bit and maybe it wasn’t the best,” he told Football365.

“At the same time I think I learned a lot from it and I went to Madrid very young and of course it is difficult to play there so I had to go elsewhere and I changed three or four teams.

“It wasn’t the best situation. I always wanted to get that stability and I feel like I found it here. I’m really happy to be here and feel at home.”

“It was always a club where I could see myself playing and after the loan I was really sure it was the perfect place for me.

“I learned everything about the club, the manager, how he wanted to do things and how he wanted to use me and improve me as a player and the ideas he had for me and the team. It was a good decision to come back.” ”

Odegaard begins his second full season at the Emirates Stadium with a new role handed to him as captain, making him the armband successor to Aubameyang.

The Gabon international was axed midway through last season before joining Barcelona in January and Odegaard admitted it had been a difficult spell for the squad.

“I think it was a tough situation for everybody. Nobody wanted it to happen,” he explained.

“It was not an ideal situation for the club, for the players, of course it was difficult for Auba. For Auba and for the manager.”