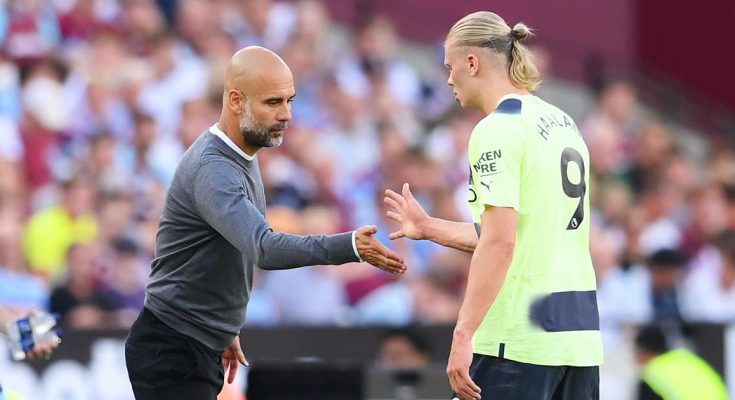 Manchester City and Pep Guardiola are working on the margins to make Erling Haaland even better after his blistering start to life in the Premier League.

Haaland joined City on a five-year deal formalized in June after the club activated the €60m (£51.2m) release clause in his contract with Borussia Dortmund.

The Norwegian forward quickly illustrated why he has built a reputation as one of the most feared strikers in world football.

Haaland found the net six times in his first four Premier League games and scored a hat-trick to help City come back from two goals down to beat Crystal Palace 4-2 on Saturday.

Yet ahead of Wednesday’s meeting with Nottingham Forest, Guardiola has hinted that he believes Haaland can reach an even higher level.

He said at a press conference: “We are delighted. I hope he is comfortable here.”

“We only had one month of competition. We still have room to improve to be a better player and we are working on it.”

With City facing a busy schedule of fixtures such as the Champions League, which they kick off with a trip to Sevilla from next week, talk has already begun as to when Guardiola can rest Haaland.

When they do, Guardiola is confident Julian Alvarez, who City signed from River Plate in January, will be ready to fill the void.

“When Erling doesn’t play, we play Julian,” added Guardiola. “Almost certainly. We’re all really impressed with his pace, his sense of purpose, his work ethic and a lot of things.”

“Every session [he’s] leaving it all out. Impact in pre-season, playing minutes now. Involved in two goals in the last game, always the sense to get involved in the right areas.

“When he goes down, he has the quality to play. Everyone talks about Erling, but he’s special.”

While Haaland completed City’s comeback against Palace, it was Bernardo Silva who started it.

Reports have suggested that Barcelona have given up on signing Silva this transfer window and Guardiola has reiterated how highly he thinks of the former Monaco star.

“I have said many times with Bernardo how important he is for us,” said Guardiola. “Just one, two days the window will finally end and everyone will be focused on what we have to do.”