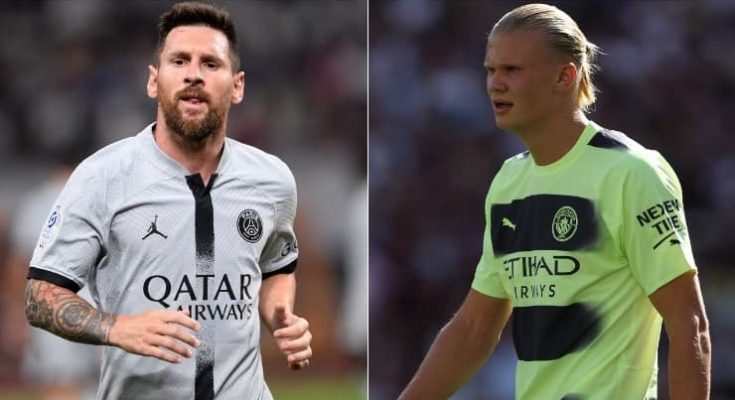 In the wake of Erling Haaland’s brace to help Manchester City beat West Ham in the first round of the 2022-23 Premier League, Pep Guardiola explained how the Norwegian star reminds him of Lionel Messi.

After a disappointing debut for Manchester City, Erling Haaland silenced critics with a much improved performance in the first game of the Citizens Premier League season. On Sunday, the Norwegian bagged a brace to help his side beat West Ham 2-0.

It was certainly a way to bounce back for the 22-year-old striker, whose lackluster performance in the Community Shield loss to Liverpool the week before had surprised many. On the other hand, Haaland’s Premier League debut is certainly the type of display people expect this season.

After a $66 million move from Dortmund this summer, many believe he could be the missing piece Pep Guardiola needs to lift his first UEFA Champions League trophy in Manchester. Although it remains to be seen, the Spanish coach has already dared to liken the popular striker to one of his former charges, Lionel Messi.

Even after scoring a double to secure City’s first win of the season, Haaland indicated he was still disappointed not to make it a hat-trick. Guardiola later said he enjoyed the competitiveness and revealed it reminded him of Messi from his time at the helm of FC Barcelona.

What Guardiola says is quite true, goalscorers are hardly satisfied even if they manage to find the net once or twice a game. Let alone the likes of Messi or Cristiano Ronaldo, who are used to scoring game after game.

Haaland, who scored 85 goals in 88 games for Dortmund, has the same ambition to score. The desire to constantly find the net is the driving force behind any prolific striker, so Haaland’s reaction should be a very promising sign.