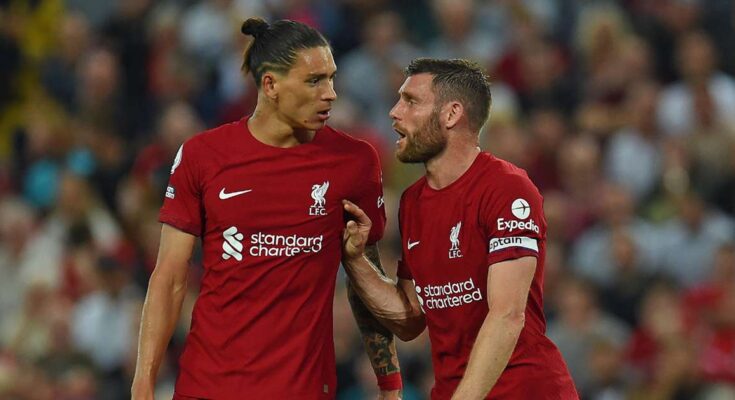 James Milner and his team-mates will “rally round” Darwin Nunez after the striker was sent off on his home debut on Monday, Liverpool’s vice-captain has said.

The Uruguayan was sent off just before the hour mark at Anfield by referee Paul Tierney during Liverpool’s 1-1 draw with Crystal Palace after reacting to a push from Joachim Andersen by headbutting the Dane’s face.

The Reds were 1-0 down at the time but still managed to salvage a point after Luis Diaz equalized from Wilfried Zaha’s first half with a thunderous effort from all of 25 yards at the end of the Kop.

The home side could have won at the death, Mohamed Salah and substitute Fabio Carvalho going wide from the volley, although Zaha almost pulled it off at the other end as well.

Speaking to Sky Sports after the match, Milner said Nunez would learn from his mistake with the help of his team-mates.

“I didn’t see the incident,” the 36-year-old said. “Obviously he’s going to be disappointed and it’s up to us to get around him and rally. I’m sure he’ll learn from it.”

“I think [the team’s] reaction was the most important thing. The team reacted very, very well and the country reacted very well – as always – they got close behind us and we could have grabbed the winner. It shouldn’t have been, but we’re moving on.

“That’s what good teams do, they come together through disappointment and you stick together. We’ve got a great team spirit at the club and you can’t talk too much about the fans here. They’re incredible of course and always get behind us, especially when things are tough. They they did and we rallied.

“It was disappointing not to get the winner but I think the response from the lads was incredible – 10 men and they kept pushing.

Liverpool have already lost ground in the title race and are four points behind champions Manchester City after two games, but Milner is not concerned as the campaign is still in its infancy.

“It’s not an ideal start but you see the preparation for the season and it’s obviously a long, long season,” he said. “It’s not the start we want, but you can see the fight.

“We had a week of tough things that happened [injuries] and the preparation wasn’t ideal. I think it’s disappointing, but you can see the fighting spirit was there and nobody can deny that. We fought until the end. .”

Liverpool went into the break 1-0 up despite having 17 shots on goal to Palace’s four in the first half, but Milner praised Diaz for the quality of his equalizer in the second.

“When we had the chances we had and the moments around the 16 and we didn’t quite get the break, sometimes you need that moment of brilliance,” he added.

“Obviously when you have players like [Diaz] on the pitch who can make something out of nothing, it was an incredible goal and hopefully there will be many more from him this season.”