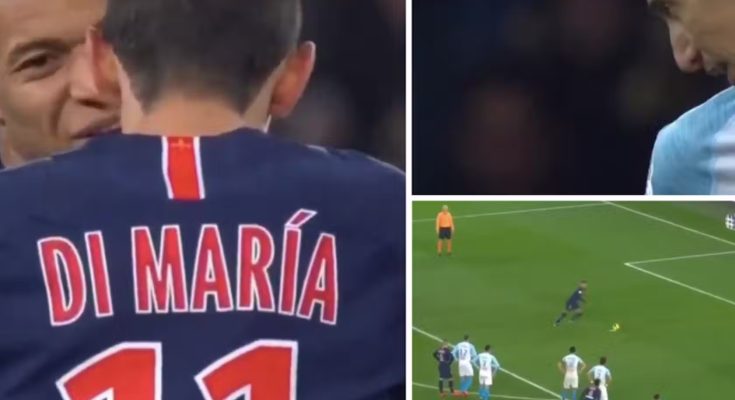 Kylian Mbappe has been in the headlines for all the wrong reasons ever since Paris Saint-Germain‘s 5-2 victory over Montpellier last Saturday.

The French champions scored five goals for the second consecutive Ligue 1 match in 2022/23, with Mbappe bagging one of them.

However, the 23-year-old striker has been heavily criticised for two incidents during the comfortable victory over Montpellier.

The first saw him give up on a counterattack when summer signing Vitinha opted to not pass him the ball. Mbappe even turned his back on the play, with Achraf Hakimi ending the move by dragging a shot wide.

The second incident actually came slightly earlier on in the first half and it’s since marked the start of a new ‘penaltygate’ at PSG.

Mbappe missed from the spot in the 23rd minute of play versus Montpellier, but demanded to be given the responsibility from 12 yards again when PSG were awarded a second penalty.

Neymar wasn’t having any of it, though…

No wonder there’s been numerous reports stating that Mbappe and Neymar’s relationship behind-the-scenes at PSG has deteriorated, eh? According to Get French Football News, things between the pair have broken down over the past six months and the saga is now close to boiling point.

It’s certainly not the first time Mbappe has been caught up in a penalty debacle either.

Back in 2019, the former AS Monaco man refused to let Angel Di Maria take a spot-kick when the Argentine winger was on a hat-trick during a Le Classique outing against Marseille.

Mbappe won the penalty and subsequently demanded he took it. But as fate would have it, he saw his tame effort saved by substitute goalkeeper, Yohann Pele.

What makes it even worse is the fact PSG were 3-1 up with only a few minutes of the match remaining. Mbappe should have just stepped aside and let his teammate have a shot at glory, but selfishness got the better of him.

So is Mbappe’s questionable attitude towards his teammates a serious problem for Christophe Galtier? Well, Thierry Henry doesn’t necessarily think so.

“It’s his [Mbappe] place,” The Arsenal legend said on punditry duty with Amazon Prime. “He will of course have to show it [his best level] as he has shown from the start. But he has nothing to prove to anyone. The coach will have to find a way to play the three [Messi, Neymar, Mbappe] and make them happy… good luck.

“At PSG, there is always a debate, a problem. They won 5-2 and we’re talking about Mbappe. Last year, it was Neymar and it will always be like that, it’s PSG.”

The PSG manager job is one of the toughest in world football right now, of that there can be no doubt.